When the search for water amounts to dicing with death

The Blue Dam in the high density suburb of Kambuzuma, located in Harare’s Ward 14 has become a death trap yet in light of erratic water supplies in Harare, residents find themselves with limited options except to rely on this pool of death for water supply.

Source: When the search for water amounts to dicing with death – The Zimbabwean 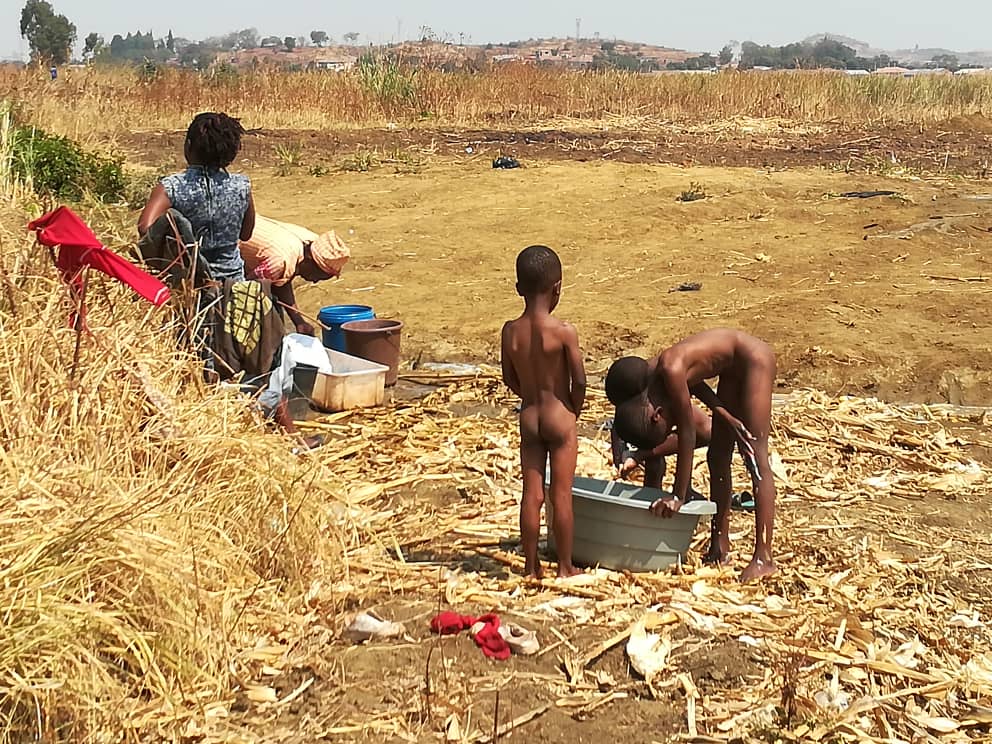 Several deaths have been recorded at the Blue Dam and in some instances, residents have died under very mysterious circumstances with the recent case being the death of a 15 year boy in September this year.
The boy drowned on a Friday and attempts to search for his body were in vain and this pushed  his family to conduct an all night ritual at the dam after which his body was discovered the following day by members of the police sub aqua unit.

Despite all the deaths and mysterious happenings, residents crowd at the Blue Dam from the early morning hours until sunset. And in some instances, the residents clash with traditional leaders who come to perform their rituals at the Blue Dam.

“We are very much aware of the dangers at this dam but the fact of the matter is that we have no other option. We are desperate for water and this Blue Dm has become our water source.

“We come here with our children in the morning and we have to keep a watchful eye on them but it’s not only children that have died at this dam. Even adults have drowned here,” said Martha Taruona,  a Kambuzuma resident.

The dire water situation for Kambuzuma residents is also exacerbated by the fact that boreholes in the area are not enough to cater for the whole population. Somehave even broken down and council is failing to repair them on time.

Interviewed residents revealed that in some instances, they have to fork out money to get drinking water.

“Those with wells and boreholes are charging us between three to five United States Dollars per month and they allow only 3 buckets per day. But given the current economic situation in the country, very few of us can afford to buy water,” said another Kambuzuma resident, Whisper Zvavamwe.
Some enterprising residents have set up gardening projects at the Blue Dam and are using water pumps to draw water for irrigating their crops.

They are also not safe from the dangers of the Blue dam.

This situation is not unique to Kambuzuma alone.

The dormitory town of Epworth, which also relies on Harare for water supply has its own pool of death where residents often crowd for water from early morning till sunset.

Several deaths, some very mysterious, have also been recorded here while in some instances, there have been alleged cases of suicide as well.

“As residents, we find ourselves with no other option except to rely on this pool of death for water. Imagine going to fetch for water knowing fully well that there are chances of you dying at the water point,” said Micah Takure, a resident.

The cases in both Kambuzuma and Epworth are reflective of the general situation in Harare especially in the high density suburbs.

Due to continued water shortages, residents have been forced to rely on unprotected water sources while in some instances they have to take up in the dead of the night and walk long distances to search for water.
Cases of children drowning in shallow wells continue to be recorded in Harare while robbery cases have also seen residents searching for water during the might fall prey to armed robbers.
On October 14, two women from Mabvuku appeared in court on allegations of murdering a robber who had attacked them on their way from fetching water in the early hours of the morning.
The girl child has also been left exposed as they have become more prone to sexual abuse during the search for the precious liquid.

And the fact that residents of Harare have to continuously rely on unprotected water sources implies they are continuously at risk of contracting water borne diseases such as cholera and typhoid.

In 2008, more than 4 000 people died in Harare as a result of a cholera outbreak and the city continues to witness cases of cholera and typhoid which have largely been linked to bad water quality.

What has worsened the water situation in Harare is the continued destruction of wetlands which act as water sources for the city.

Harare relies on its headwater wetlands for water supply and construction and agriculture on wetlands continue to impact negatively on water supply in Harare. Fertilisers used in urban farming have also increased the cost of water treatment for the Harare City Council.

The Provincial Development Coordinator for Harare Province, Tafadzwa Muguti has declared war against wetlands invaders much to the relief of environmentalists in Harare.