When your entire salary buys 7kg beef and some peanut butter: How hyperinflation hit Zimbabwe 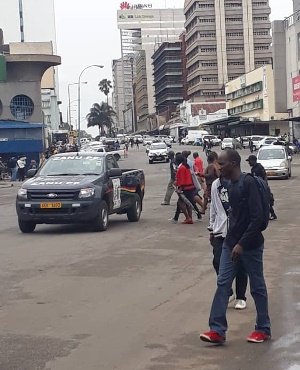 A heavily-built man presses his mobile phone, glares at the screen and shakes his head dejectedly. Two Mazoe orange crush juices, three cartons of zap nax, tasty and flavoured corn treats and biscuits are perched in a shopping trolley inside one of the country’s largest wholesalers, Mahomed Mussa in Harare.

“The prices are unbelievable. That is why I am looking at my phone calculator,” John Betani tells Fin24. “I was just calculating if the money I have can buy what I need for my son.  Life is just tough now, my brother.”

Although he has just been paid, Betani says the salary cannot sustain a family of six, given the rapid price increases for basic commodities in the country.

Betani is shopping for his son’s boarding school food.

Apart from the foodstuffs for his son, the school has also asked for an additional amount of ZW$950 for school fees after hyperinflation eroded value.

That way, he says, he will split the peanut butter between the family and his son at school.

“We are sharing the little we have. But more attention is given to the one at school,” Betani says.

“When the economy was dollarised, I could save and still have money in the bank the next pay day. Basic things like grocery and family upkeep were not a hassle.”

And he still has to feed his family on the same salary, he says.

According to the Public Accountants and Auditors Board (PAAB), a body mandated to regulate auditing and accounting standards in the southern African country, Zimbabwe is now in hyperinflation territory again.

“The PAAB can advise that there is broad market consensus within the accounting and auditing professions that the factors and characteristics to apply the financial reporting in hyperinflationary economies standard (IAS 29), in Zimbabwe have been met,” reads the PAAB statement, seen by Fin24.

Inflation was in August recorded at 300%, the second-highest in the world after Venezuela in the period, according to the International Monetary Fund.

High inflation has brought with it massive erosion of earnings for individuals and companies.

The country’s statistics agency, Zimstat, will not publish annualised inflation price numbers until February of next year to enable the government to collect more data comparing price information on a like-for-like basis.

Finance Minister Mthuli Ncube said in August that Zimstat would only release the numbers in 2020 because prices are no longer measured in United States dollars, making the figures incomparable.

But some believe the inflation figure is in fact higher that 300% last recorded in August.

Despite the ban on inflation readings, the effects of hyperinflation are evident.

A merchandiser for a company that manufacturer’s peanut butter, jam and other edible spreads, who preferred anonymity, tells a tale of an economy deep in crisis.

“Our sales have gone down by a worrying margin. Customers now consider our products as luxuries. The cost of living is now very high,” he says.

“Because of the state of the economy, we have cut on the orders that go into wholesalers. In the past, we used to give them stock that would be stocked in their warehouses.”

Now, his company only stocks products for the shelves.

This is because inventory turnover ratio is at an all-time low, he says.

Stock turnover rate is considered to be a measure of sales performance.

“Our target market in wholesalers is civil servants. Whenever it was pay day, our sales would jump. Civil servants just got paid and we have not felt the impact,” the merchandiser told Fin24. “Stock we sold in a week now takes about a month and a half.”

The wholesaler, a popular shopping destination for low-income earners, civil servants and smaller retailers, is a ghost of its former self.

Only a handful of people are walking around, holding empty shopping baskets.

Those who choose to part with cash in the shop, carefully select basics such as rice and flour.

Such is the plight of many Zimbabwean business and individuals as hyperinflation strikes again.

Unnerved by the situation, retailers such as Mohamed Mussa put out notices that prices on shelves could vary at the till as the Zimbabwe dollar lost its value.

Purchasing power has been eroded. For instance, bread, which retailed at US$1 in dollarised Zimbabwe now costs ZW$15.

Zimbabwe first experienced hyperinflation from around 2005 until 2009. It hit 500 billion percent at its peak in 2008.

As the currency suffered, the Zimbabwean unit was discarded and the US dollar adopted as legal tender.

But workers are bearing the brunt of hyperinflation.

This is because when the central bank introduced bond notes, currency authorities said it was on par with the US dollar in December 2016, and employers maintained US dollar salaries.

How did the wheels come off?

Zimbabwe had a negative balance of trade position and a current account deficit, financed the budget deficit through creation of electronic money (RTGS$) and issuance of treasury bills, and general economic mismanagement triggered the latest round of inflation.

Deep in the throes of hyperinflation, Zimbabwe may be forced to redollarise once again.