Who is Dr ‘Gucci’ Grace Mugabe

WASHINGTON — The decision by embattled President Robert Mugabe to prepare his government for the days when he no longer rules has brought about the apparent end of that controversial rule itself. 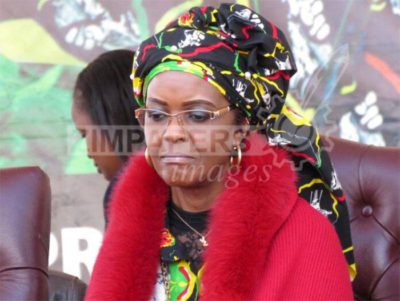 The recent sacking of his vice-president was a seeming bid to pave the way for the 93-year-old Mugabe’s reviled wife to assume the presidency — setting up a dynastic succession — and likely prompted Zimbabwe’s military to finally step in.

Grace Mugabe’s political profile has soared in the past few years as the 52-year-old has positioned herself as her husband’s successor — even publicly challenging him earlier this year to officially name one.

She’s been dubbed “Gucci Grace” due to her extravagant spending and twice used diplomatic immunity as a shield from accusations of assaulting a British photographer in Hong Kong and whipping a South African model with an electrical cord.

Grace, however, was not always such a polarising, high-profile figure.

Born in Benoni, South Africa, Grace grew up in a dusty mining town to the east of Johannesburg — a town which also spawned actress Charlize Theron.

While married to an air force pilot, Grace met the much older president years ago when she served as a secretary in his office.

“He came to me and started asking about my family,” she told South African journalist Dali Tambo in 2013, in a rare interview. “He just started talking to me, asking me about my life. Were you married before, things like that…I didn’t know it was leading somewhere. I was quite a shy person, very shy.”

Despite the various obstacles before them — including a 41-year age gap and the fact that Mugabe was still married to his first wife, Sally — the president wooed his future wife over tea and scones.

“I felt a bit uncomfortable when he proposed to me since he was still married to Sally,” Grace said.

Sally, who was suffering from a terminal illness, died in 1992. Four years later, Mugabe and Grace married in an extravagant ceremony attended by 40 000 people — including former South African leader Nelson Mandela.

By the time of their wedding, the couple already had two children, and a third arrived a year later.

According to analysts, Grace seemed to struggle to emerge from the shadow left behind by the president’s first wife and mostly kept to herself. She focused primarily on her charity work and rarely got involved in politics herself.

Grace has also become a powerful businesswoman. While she has run several failed mining businesses, Grace built her own dairy farming empire on five farms previously owned by white Zimbabweans.

The former owners had been evicted from their lands during the country’s controversial “land reform” process.