Why would a ‘normal’ person vote for ZANU PF? 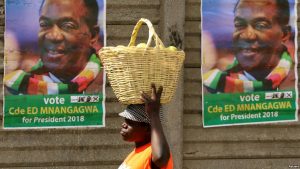 There has been a question that has vexed me – and, I am sure, so many others – as to why, after being subjected to so much untold suffering for nearly four decades by ZANU PF, any ‘normal’ person would still prefer to vote for their tormentor to keep on tormenting them.

Admittedly, ZANU PF’s so-called ‘victories’ at the polls, ever since Zimbabwe’s independence from British colonial rule in 1980, have been nothing short of questionable – amidst widespread allegations of rigging, intimidation, unfair coverage  of opposition parties in the state media, which has been allowed to have a monopoly, and violence – it is, nonetheless, true that the party enjoys enormous support amongst the population.

What is shocking, though, is the fact that this support base is mostly comprised of those who have suffered the brunt of ZANU PF’s incompetent and corrupt leadership, which has resulted in widespread poverty – characterised by unemployment, hunger, lack of basic commodities, having to sleep in bank queues just to withdraw $15, lack of medication in hospitals, schools that are deprived of proper and adequate learning material, employees who are not paid their salaries and terminal benefits…the list goes on and on.

So, why would someone who has had to endure such hell on earth for decades want to continue in this nightmare, by continually voting for the very same people who have perpetrated this abuse?

I am sure this is a question only a competent psychologist and psychiatrist can adequately answer – but, we can all try to understand the logic behind a seemingly normal person desiring to stay in an abusive relationship.

I am reminded of a similar question we had to tackle when I used to work for an anti-domestic violence NGO in South Africa some years back – why do some victims of domestic violence, at the hands of their partners or spouses, continue to stay with their abusers for years and years…some, until they are eventually killed by these perpetrators?

There were several proposed explanations to this vexing question – such as, the victim’s financial dependence on the perpetrator, and fear of violent repercussions at the hands of the abuser, should she or he decides to leave.

However, another explanation that comes to mind, seems to fit in perfectly with the question we are faced with today regarding the bizzare relationship between ZANU PF and its supporters, who are largely also its victims.

Some victims have been conditioned by the perpetrators – during the years of abuse – into believing that they are worthless and can not amount to anything without the abuser.

They have been brainwashed into believing that they can only have value by being with the abuser, and no one else can ever love them.

In fact, some victims of abuse have come to believe that the abuse is a sign of love, and would never want anything ‘bad’ to happen to the abuser – that is why they would even push away, or even fight, all those who would want to assist them leave the relationship.

An example is that of a young lady – who was around 23 years of age – whom we tried to assist to leave her abusive relationship.

She was seemingly intelligent, and we managed to get her a job and a small cottage so that when she leaves the abusive relationship, she would be able to take care of her children and herself.

However, whenever she left her partner, sooner rather than later, we would hear reports that she had voluntarily returned to him – and the cycle of abuse would start all over again.

When we asked her why she had returned, she would say that the partner had promised her that he had changed, and she had believed him.

Of course, he would behave as if he had changed for a few days, weeks, or even months, only go back to his old ways once he felt comfortable again.

What perturbed us the most was not the fact that she had returned to the abuser, but that she repeated this time and time again, despite the fact that it was now clear that he would never change…and his promises to change were all a bunch of lies.

The abusive partner would even agree to seek counselling and actually attend the sessions.

However, this change never seemed to last, as he would eventually revert to abusing her, whilst blaming her for his relapse.

Nevertheless, after all that help we tried to offer her, and till the time I left the NGO after two years…she kept going back to him!

In fact, she ended up resenting our assistance, as somehow he had managed to convince her that we were the enemies, who were jealousy of their relationship and were trying to ruin it!

This is exactly what I am witnessing again in Zimbabwe, as people who are obviously suffering at the hands of ZANU PF always go back to it, time and time again – and even view those trying to help them see what is happening, as enemies.

That is why, those who receive the brunt of ZANU PF’s abuse – the marginalised, and the suffering – are the ones whom ZANU PF has targeted to manipulate and brainwash into believing that all those trying to assist them see the light are enemies that should be beaten up or even killed.

ZANU PF has managed to convince those that have had to endure its abuse regularly for nearly for decades that it has changed, and that by merely removing former leader Robert Gabriel Mugabe – yet, replacing him with the same people who have been at the centre of the abuse since day one – is somehow a ‘new dispensation’.

What I have leant from my work with domestic abuse victims is that, any abuser who loves to use the term ‘I have changed’, would have seldom changed.

He will go back to his old ways sooner or later.

The same goes for ZANU PF!

There is no way this rogue abusive party can ever genuinely change.

Besides, it is now too late for any normal person to continue giving these people another chance – as we have done so for the past 38 years…are those not enough chances?

Would we not be fools to continue giving ‘chances’ to such people after all this time of not changing?

Even the courts of law would cease ‘giving another chance’ to a habitual criminal who is always committing offences, despite being given numerous chances.

Mnangagwa himself, as the country’s president, would even agree with me that, as he has constitutional powers to pardon convicted prisoners, he would never continue awarding this clemency to someone who is a repeat offender… especially for 38 years in a row?

So why would Mnangagwa think that Zimbabweans who have suffered so gravely at the hands of a ZANU PF that he had been at the centre of for decades, should give them another chance?

Even if – for argument’s sake – ZANU PF under Mnangagwa has genuinely changed, logic and common sense would dictate that its too late, and it is time that Zimbabweans moved on and chose someone else.

We would be fools to trust this party again, after all they have done for all these years.

An intelligent person would rather give someone else a try, even if they also prove not to be any better – but, at least it would not be as foolish as continually going back to a chronic abuser, believing that this time the change is real…for 38 years!

The people of Zimbabwe now need to regain their self-confidence and believe that they do not need to be dependent on ZANU PF.

We need to believe that we can, indeed, move on.

We need to believe that we are special and that we deserve only the best – we do not have to always settle for crumbs…for second best.

No matter how much we have suffered, and are suffering, let us refuse to be conditioned to believe that if our abusers – who caused the suffering in the first place – come back to us and offer us a loaf of bread, then we just jump and go back to them.

That is one way the abused are always kept captive by their abusers – if I do not go back to him, the kids and I will starve to death…at least he is offering food, school fees, or even some luxuries!

Whatever ZANU PF can promise, and no matter what packaging they may decide to come to us in…they will always be ZANU PF and the people of Zimbabwe can do better than keep choosing known criminals, abusers and looters.

ZANU PF can come with their ‘command this and that’, or their ‘Zimbabwe is open for business’ mantra, but the fact still remains that Zimbabweans who have truly suffered at these people’s hands need to break free, and believe that their tormentors are not their also their saviours.

There are better options out there, and we need to choose better partners.

It is time we broke free from this abusive relationship and let all those who have suffered the indignity of sleeping in bank queues, spending the night without food, failing to pay for their children’s school fees, failing to buy their wives or husbands those nice things, living in a small little room with their whole family, begging their employers for unpaid salaries that they are owed, had their water supplies disconnected just because they can not find a job – let us all stand together and reclaim our dignity.

We do not deserve this humiliating and inhuman life…we deserve better!

We are all children of the Almighty Jehovah God, and He hates it when His children suffer, but let us not perish due to our own ignorance and foolish decisions.

We have a choice…we can choose to finally put an end to all this suffering.

July 3O is around the corner, and we have another chance to finally decide between continued suffering and a truly NEW LIFE – it is our choice!