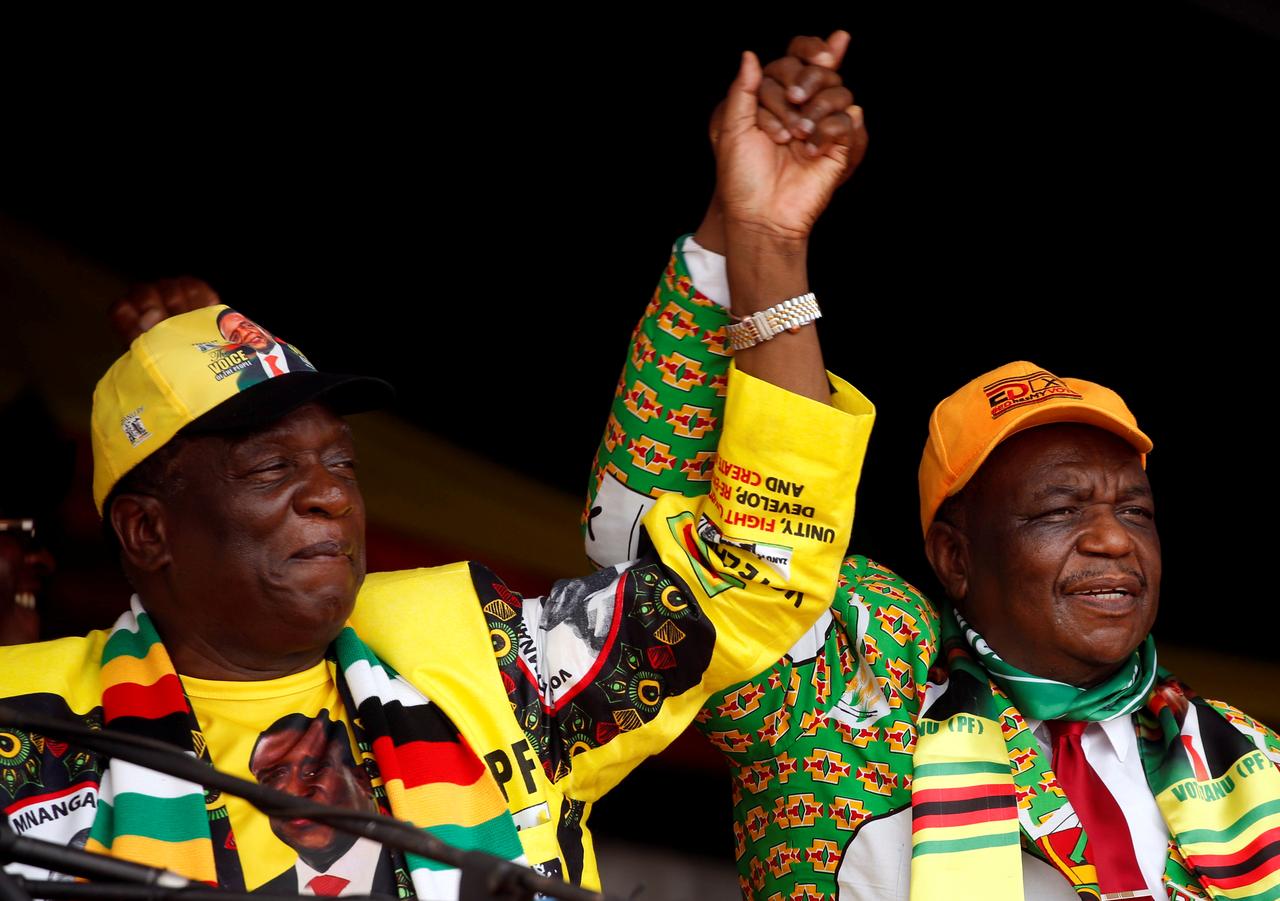 HARARE (Reuters) – Zimbabwe’s President Emmerson Mnangagwa dismissed rumours of a rift with his deputy, which have gathered momentum since he promised action in response to a brutal security crackdown that began last month while he was abroad.

Mnangagwa, in comments published on Friday by weekly Zimbabwe Independent and daily NewsDay, said “not a single person” had shown him evidence of divisions between him and Constantino Chiwenga.

The coup that toppled Robert Mugabe in November 2017 was led by Chiwenga, who the same newspapers have cited officials as saying is now effectively in charge of the country.

Brushing off the speculation, Mnangagwa said he and Chiwenga “are comrades and understand each other better than you think.” The media spokesman who the two men share did not immediately respond to a Reuters request for comment.

The president also shrugged off telephone calls he said he received while abroad, from an official who told him he would not be allowed to return to Zimbabwe because of a coup.

“I laughed and advised that person to enjoy a peaceful night’s sleep,” the president was quoted as saying.

The crackdown began in mid-January in response to violent protests that were triggered by Mnangagwa’s decision to increase the price of fuel by 150 percent.

He returned home early from a four-nation official tour when the unrest escalated, promising to clamp down on abuse by security services and investigate any illegal actions against protesters.

Lawyers and rights groups say that, despite this, hundreds of people remain in detention, with many having been denied access to legal representation. They say 12 people were killed during the protests while police say three died.

Residents of Harare say scores suspected of involvement in the protests have been dragged from their homes while some opposition lawmakers have gone into hiding.

Nicknamed ‘Crocodile’, Mnangagwa was a close Mugabe ally during much of the post-colonial leader’s 37 years in power.

When he took over as president in November 2017, Mnangagwa promised to revive Zimbabwe’s disintegrating economy and break with his predecessor’s authoritarian politics.

To date, evidence suggests he has done neither.

The persistence of the crackdown has led to speculation that Mnangagwa is not in full control of the military, while high and still rising inflation continues to erode Zimbabweans’ purchasing power.

Mnangagwa on Friday dismissed foreign criticism of the government’s reaction to the protests, saying while he regretted the loss of life, security forces needed to protect property and citizens.

“We have told the Western countries that they cannot …raise concerns when they are the ones sponsoring the violence,” Mnangagwa said, without naming the countries.

More unrest threatens. The main public sector union on Wednesday backed down from plans for a national strike, citing the volatile security situation, but teachers will go ahead with a work stoppage.

Two allies of Mnangagwa – a lawmaker of his ZANU-PF party, Mayor Wadyajena, and former deputy finance minister Terence Mukupe – said last month that some members of the government were trying to impeach him.

Towards the end of the Mugabe era, ruling ZANU-PF party and military officials publicly denied there were factions positioning to take over from him.

But in private they were plotting against Mugabe, and in 2017 he was ousted.