‘With or without Mugabe, Zanu PF the same’

Source: ‘With or without Mugabe, Zanu PF the same’ – DailyNews Live

BULAWAYO – Zimbabweans in the City of Kings yesterday woke up to a shock
new Cabinet announcement by President Emmerson Mnangagwa. 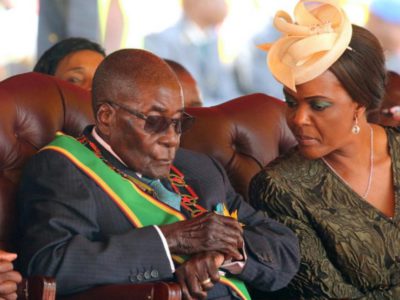 The sentiments expressed in the streets here were that of clear
disapproval, hence confidence in the prospects of recovery has been
eroded.

This comes after people here had lately pinned their hopes in the new
government following the resignation of former president Robert Mugabe.

“There are no surprises in Mnangagwa’s Cabinet,” Fuzwayo said.

“He is a perfect Zanu PF and Mugabe graduate and anyone would have
produced a similar Cabinet.

“Matabeleland has always been known to be represented by Zanu PF or Mugabe
praise singers and Mnangagwa has gone the same way.

“That is the best Zanu PF can pick from Matabeleland – people who sold out
on their souls against Matabeleland just to enjoy these Cabinet posts,”
Fuzwayo said.

However, poet and political activist Bhekumusa Moyo chose to differ.

“In this age and time, I believe as Zimbabwe we need to step out of the
regionalism thing and look at Zimbabwe as a nation. Merit must come first
than appeasing perceived theories around tribe or region. All in all,
let’s implement devolution to stop the talk of regions,” he said.

He, however, singled out Sithembiso Nyoni, Obert Mpofu, Kembo Mohadi and
Angeline Masuku from Matabeleland region as an act of recycling dead hood.

Women Arise of Zimbabwe director Jeni Williams said she was concerned that
the president seems to be indicating left while turning right back into
militarism.

“It was once said the presidency is a strait jacket, are we beginning to
realise that the military dictates the shots and not Zanu PF party
structures or the people of Zimbabwe?

“Sober assessment is necessary by civic society regional and international
community so that desperately required economic recovery is delivered to
Zimbabweans,” Williams said.

She added: “It is obviously the consolidation of war veteran power and
along with that is the strengthening of patriarchal systems. At least 52
percent of the nation will be in disbelief. Women have to wake up and act
fast.”

Zenzele Ndebele, a journalist and activist said there was nothing “new”
on Mnangagwa’s new Cabinet.

“There is nothing new. This was always about Zanu PF succession. People
cheered and celebrated while Zanu PF was repackaging itself.”

Veteran legal practitioner Brighton Ndove said there was nothing wrong
with appointments made by Mnangagwa.

“From a legal standpoint I don’t see anything wrong with the appointments
and the perceived exclusions of the opposition party elements,” Ndove
said.

“Mnangagwa is simply completing his predecessor’s term of office which is
a Zanu PF issue. Ever since the 2013 elections there was never an
inclusive Cabinet and the president’s approach is quite consistent with
his mandate to complete,” he said.

Ndove justified the inclusion of the military in the new Cabinet. “It
would have been fool-hardy for one to expect the military guys to
completely pull out and not supervise or monitor what they promised the
citizenry.”