Woman recounts how hubby was beaten, burnt to death in SA 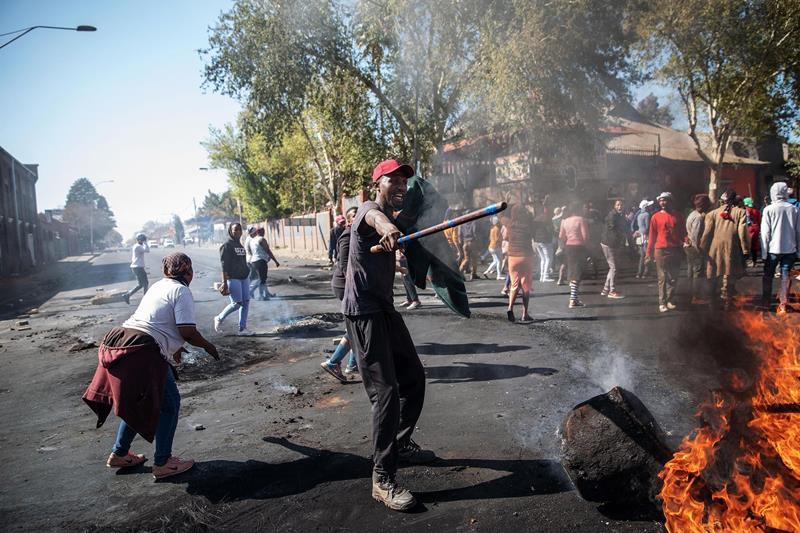 Isaac Sithole ran from his burning home, trying to get to a police
station in Katlehong. But a mob caught the 35-year-old Zimbabwean, beat
him and set him alight.

On Friday, his widow, Lydia Chimbirimbiri, sat in Tsholo Hall in
Katlehong, with haunted eyes. In her arms, she cradled her swaddled,
sleeping six-week-old baby, Fortunate.

“He was running for his life but they got him,” she said quietly. “They
beat him, they poured petrol over him and they burnt him, just because he
was a foreigner.”

As a group of Zimbabwean women huddled around her displayed gruesome
pictures of Sithole’s body lying in the street, Chimbirimbiri looked away.
She doesn’t know if her husband’s killers have been apprehended.

“I just need money to go back home to Zimbabwe, but I need my husband’s
body so I can bury him. It is at the Germiston mortuary.”

The couple have two other children in Zimbabwe.

Chimbirimbiri and her family lived in Katlehong Zone 1, Mandela Section,
the scene of deadly xenophobic violence this week. Sithole’s body was one
of two found in Katlehong.

Tsholo Hall and nearby DH Williams Hall are being used to provide shelter
for several hundred people displaced in the violence. Many there told how
they had sought refuge at the Katlehong North police station during
attacks.

“Even here you can’t feel safe; they can come with a petrol bomb,” said
Stella Makosa.

“Though the police are here, those guys can still come back.”
She told how she was forced out of her home on Thursday morning.

“They were demonstrating, saying: `You foreigners you must go back to your
place; we don’t want to see you here. You are taking our jobs, you are
taking our business.’ They went from door to door, chasing people out.

“Everything I own was burnt to the ground. I ran for my life.”
Like many others at the halls, she fled her home with only the clothes on
her back.

“We’ll rather go back to Zimbabwe, rather than die here,” she said.

The women said a baby had been burnt to death.
“His mother fled and left the baby, and the shack was burnt down,” said
Mercy.

“We can’t go back to Mandela Section. It’s like Sodom and Gomorrah there,”
said Zimbabwean Marilyn Nyoni.

Castro Ngobese, the spokesperson for the MEC for Human Settlements, said
804 adults and children, from Zimbabwe, Mozambique, Ghana, Lesotho and
Malawi, were being accommodated at relief centres.

He said 487 of the adults had said they wanted to return to their
countries of origin.

Since Monday, 11 people have been killed and several shops, mostly owned
by foreign nationals, looted and destroyed.

“Over the past few days our country has been deeply traumatised and
troubled by acts of violence and criminality directed against foreign
nationals and our own citizens,” President Cyril Ramaphosa said.

“People have lost their lives, families have been traumatised.
“There can be no excuse for the attacks on the homes and businesses of
foreign nationals… Equally, there is no justification for the looting
and destruction of businesses owned by South Africans.

“These acts of violence have made us doubt the very foundation of our
democratic society, our commitment to human rights and human dignity, to
equality, to peace and justice.”

No degree of anger, frustration and grievance could justify such acts of
destruction and criminality, he said.

People in other parts of Africa had supported South Africans during the
dark days of apartheid, and helped the nation to achieve democracy.

Gauteng police said on Friday, 74 more people had been arrested after
violence flared up again in Katlehong.
Police spokesperson Brigadier Mathapelo Peters said 497 people had been
arrested since the xenophobic attacks began in the province.

“Police can also confirm that while 11 people were killed during this
period, only seven deaths have been directly linked to the incidents of
violence as police continue to investigate the circumstances surrounding
each death.”

He said more humanitarian aid was being sought for the displaced people,
and Gift of the Givers was providing aid at relief centres.
– Saturday Star