Source: Women quota in council receives thumbs up | The Herald

Women councillors across Zimbabwe are a minority in local authorities and have suggested to President Mnangagwa, who agreed to “panel beat” democracy, that systems be put in place to ensure at least 30 percent of all local government councillors are women.

WILGF Midlands chapter president, Councillor Idirashe Dongo, said women wanted to see something closer to the constitutional ideal of gender equality and there was a need for a sustainable way to attain equality in terms of decision making in local government.

Women councillors said their participation at all levels of decision making is critical for the development of the country as local government plays a fundamental role in the day-to-day lives of women, the elderly, youth and men by virtue of being closest to the general populace.

“Women’s representation at the local level is thus critical for prioritising women’s practical and development needs as well as localising the Sustainable Development Goals through policy decisions on education, primary healthcare, water and sanitation, transport and a host of other services,” said Cllr Dongo.

President Mnangagwa said local government is the bedrock of national governance as has accepted the WILGF argument. 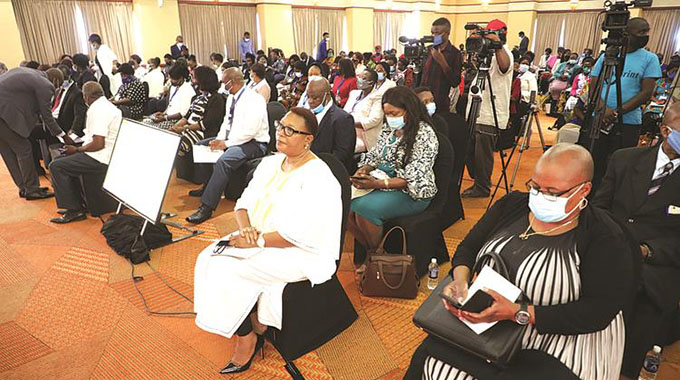 He said it was necessary to consider extending the women’s quota to councils, urging women councillors to equally develop and implement concrete strategies to realise their objectives.

“You are advocating for an improvement in your representation at local government level. We fought for democracy and there was a lot of sacrifice by the girl child and boy child for us to achieve that democracy. Currently councillors are elected on the basis of that democracy,” he said.

“You are now asking me to panel-beat democracy in order to meet our needs rather than our needs to be met through plain democracy. Fortunately, I am in agreement with you, and that is granted, and I will ask the Minister of Local Government to begin the process,” said the President to a thunderous applause from the councillors.

“The most critical level of government is the local government entities which run our communities at local level. Local authorities are the bedrock of State power. So I would not have made a mistake to abuse that State power . . . because we have applied this (women quota system) in the National Assembly, where we agreed as political parties that we should comply with the African Union Charter as well as the Sadc Charter which requires member States to progress towards a 50-50 gender parity,” he said.

The President said the setting up of public institutions such as the Gender Commission and the Women Micro Finance Bank as well as the domestication of international conventions and protocols on women issues are some of the interventions Zimbabwe has made to achieve women empowerment.

But he noted that there have been fewer women councillors in recent years and deliberate efforts should be made to reverse the trend.

“Going forward, it is at such forums that you should invite ministries such as Ministry of Finance and Economic Development, Ministry of Lands, Agriculture, Water and Rural Resettlement and of Mines and Mining Development among others to unpack and explain broad economic policies that propel development and improved standard of life for our people.

“The Second Republic is about action, and those issues that put bread and butter on the tables of our people,” he said.

The President stressed the need to widen democratic space through increasing women participation in decision making processes. In doing so, it was important for women forums to develop and implement concrete strategies for the realisation of those objectives.

“These strategies must take into account the present realities of demography, geographical spread as well as socio-economic status and education levels of women. As women leaders, it is important that you introspect and reflect on the factors that militate against the involvement and advancement of women in decision making,” he said.

The President said the first past-the-post electoral system led to less women in Parliament and within local authorities. He said under the Second Republic, his Government stood ready to consider options and proposals that will see the inclusion of more women in decision making bodies.

He agreed that women and girls bear the brunt of poor service delivery by local authorities.

The president said riding on the successes of the Transitional Stabilisation Programme, Government continues to strike the balance between women empowerment, emancipation and economic growth.

The President said Government is working on a raft of measures to support local authorities with $19,5 billion having been allocated for devolution in the 2021 National Budget. Those funds should translate into the speedy development of social and economic infrastructure in the communities.

“At Central Government level, we have embarked on a vigorous infrastructure development programme with the construction and rehabilitation of major highways, dams and irrigation schemes to push forward economic development. Women and youths must take advantage of the vast employment and empowerment opportunities which are associated with these ongoing national development projects,” said President Mnangagwa.

“I, thus, urge you to turn your respective councils into local economic development engine-rooms through crafting council resolutions which are in tandem with the national economic focus, drive and vision. In addition, councils must seek stronger collaboration with universities and vocational training centres towards improved service delivery leveraging on the ongoing innovations and inventions as well as technical and entrepreneurial programmes,” he said.

In attendance were Speaker of Parliament Advocate Jacob Mudenda and President of the Senate Mabel Chinomona, several Cabinet ministers, the Zilga leadership, the leader of the opposition in Parliament Thokozani Khupe and other delegates.

Local Government Minister July Moyo presented President Mnangagwa with a walking stick on behalf of local government while Zilga also gave him a ceramic jar as a gift.

Newer Post
Will the New Year open up an Era of Opportunity?
Older Post
Zimbabwe: Arrest of Harare mayor Mafume, incompetence or corruption?