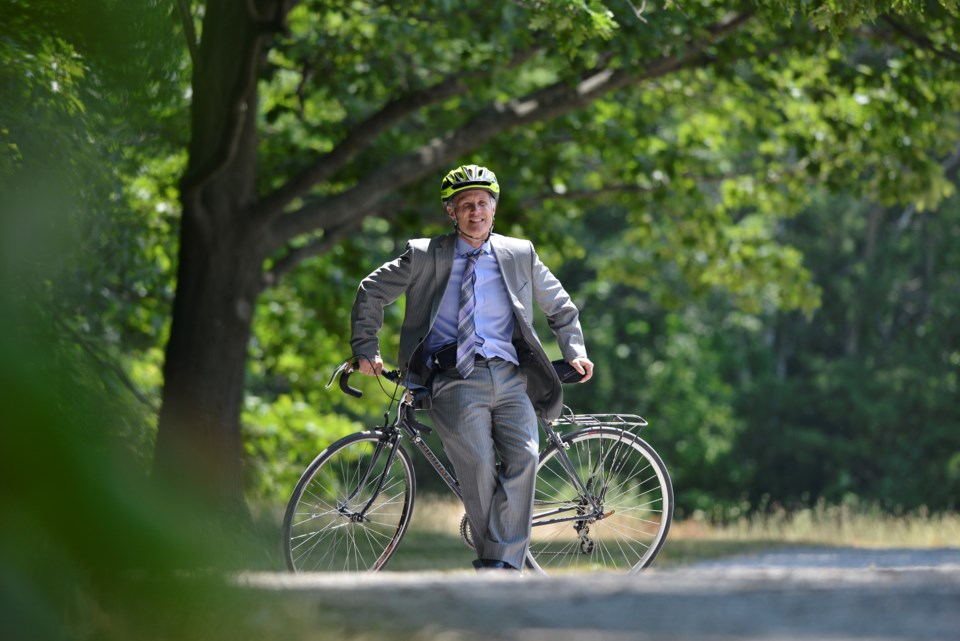 An epidemic in Zimbabwe gave Dr. Charles Gardner the final push he required to switch his medical career to public health.

That career has seen Gardner at the helm of regional public health agencies for H1N1, SARS, and now the COVID-19 pandemic.

The medical officer of health for Simcoe Muskoka District Health Unit was in Zimbabwe in the 1990s with his wife for a year. As a medical doctor and a nurse, they worked at rural hospitals and on community outreach projects.

“I ended up finding her work more interesting than mine,” said Gardner.

Gardner also managed to work outside of the rural hospitals while in Zimbabwe, where, at the time, there was an AIDS epidemic.

“I participated in some of the AIDS outreach that was going on as well… to provide education and to address people’s concerns and questions,” he said.

The work further stirred an interest in pursuing a role in public health.

“That kind of outreach work is very much public health by its nature, and is very much focused on prevention,” he said. “For my whole life, I’ve been interested in health from a prevention point of view – achieving health by living a healthy life. So that became strengthened by my experience in Zimbabwe where I saw the importance of it in that setting.”

Gardner grew up in St. Thomas, Ont., and developed a strong interest in science at a young age.

He did well in science fairs and by the latter years of high school, he had decided to become a doctor. His early intent toward a career in medicine makes it hard to decide what his career path would have been had he not become a doctor.

But Gardner said he did well in mathematics and guessed he could have pursued a career in engineering, but it didn’t cross his mind.

After medical school, he started practising family medicine with a residency in Newfoundland. There he met his wife. He spent two years as a family doctor in New Brunswick before the two went to Zimbabwe to work for a year.

Upon returning to Canada, Gardner was accepted to the University of Toronto for the public health and preventative medicine residency program, which he finished in 1998.

He’s been in public health ever since.

COVID-19 is not the first pandemic Gardner has seen or navigated as a public health official, but it is the one with the most impact on the most people.

“We’ve been preparing for pandemics… pretty well for the entirety of my career… and we were thinking it would be pandemic influenza,” he said. “In 2009, when we had H1N1, we thought, ‘well that’s pandemic influenza,’ but what we’re experiencing now is vastly more impacting on us all and on our lives than anything we experienced with that previous pandemic.”

As the medical officer of health, he is the lead for the local health unit and a public figure. The COVID-19 pandemic has made him even more public. He does weekly live stream updates, which are posted on Facebook and YouTube and also serve as a regular briefing for media.

“A very big part of public health is communication with the public and with stakeholders and partners,” said Gardner.

He acknowledges the COVID-19 pandemic has intensified that role.

“Public health tends to be low profile when there isn’t a crisis happening,” he said. “Our work is to prevent disease, to prevent illness, and to keep people healthy in the first place and that usually doesn’t catch the news that much… but when you have a crisis, it becomes front and centre and gets a lot of attention. This is the pandemic of the century and as the lead representative of my agency, I end up having a high profile, much higher than I normally have had.”

The doctor is comfortable with public speaking and media work, and enjoys both verbal and written communication. While he wouldn’t seek out the public spotlight, he is OK with it.

“I’m quite happy to lead my private life without having a high profile,” said Gardner. “But I think it’s important to the role right now.”

As a leader, Gardner is known for a calm demeanour and even tone, both of which are by design for the sake of effective communication.

“I’m uncomfortable being otherwise,” said the doctor. “It’s not that I can’t get distressed, but I don’t feel it’s effective. … Maybe others can function that way, but I don’t function well that way. I function best if I can keep myself calm and focused.”

Since March, the doctor has delivered messages of condolences to the families of those in the region who have died with COVID-19. He has encouraged people to wear masks, to wash their hands, to practise physical distancing, and, more difficult than other messages, he has told people not to gather with family for holidays.

Family gatherings are the thing Gardner is most looking forward to when the pandemic is over. He and his wife have two grown sons together, and many extended family members.

“We typically gather at Christmas and Easter and Thanksgiving and we will have many people – extended family – over at our place. For Christmas, it’s often for days at a time,” he said. “There’s none of that now, none whatsoever.”

He has, several times, acknowledged the difficulty of the public health measures and controls in place through the year. The doctor is not immune to the impacts of lockdowns and prohibitions on gathering.

“Like everybody else, my life is very different from what it was before the pandemic,” he said.

The doctor is working from home, and for many more hours than usual. Where once he might have filled his free time with physical activities like cycling, canoeing, or hiking, he has less free time and fewer options.

“I don’t have nearly the range of activities that I used to have,” said Gardner. “I’ve always been a very physically active person.”

He typically rides his bicycle to work for most of the year. He will also cycle recreationally, do lots of hiking and regular canoe trips with the family. He’s been involved with the Barrie Canoe and Kayak Club for several years and has led trips with the club as well.

“Most of that has stopped,” he said.

He does, however, manage to get out every day for walks with his adopted dog, Mariah, a mutt with some similarities to a German shepherd and a Rottweiler. On good days, Gardner and Mariah hike through the Ardagh Bluffs in Barrie.

Gardner has also been working for the past five years on becoming fluent in Spanish.

“It’s a handy language for travelling,” he said. “I like travelling.”

He’d like to one day take a trip with a mission similar to the work he and his wife did in Zimbabwe.

But none of that will happen before the end of the pandemic, yet another reason Gardner is happy to see a vaccine being distributed and an inoculation program beginning.

“This is the pandemic of the century; it’s really worse than anything we’ve had to deal with since the Spanish Flu of 1918,” said Gardner. “It has the potential to cause much more illness and death if we don’t manage it well and vaccines are critical to bring it to an end.”

This level of mass vaccination – on a global scale – against COVID-19 harkens back to the 1950s and ’60s and the polio vaccine.

“The profile and scope of this would be much the same,” noted Gardner. “In a sense, it’s far more impactful. Although polio had devastating effects on children, it didn’t lock down our communities the same way. We’re all impacted now by COVID-19. There’s an enormous impact on our social lives and economy. It’s a different scale of impact altogether.”

Having studied such history as polio vaccination and Spanish Flu in school, Gardner now finds himself part of public health history as the first doses of the vaccines against COVID-19 are administered in Ontario and even in Barrie. Gardner was present for the region’s first inoculation – for a Barrie-based personal support worker – on Dec. 22.

“I find myself profoundly moved that they’re arriving… that we’re delivering this,” said Gardner. “I feel privileged to be a part of it.”