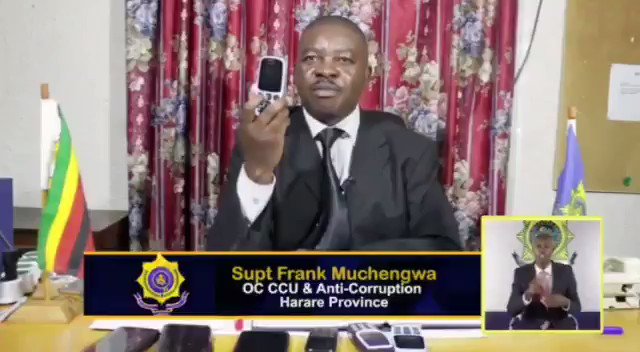 In a statement, Information secretary Ndavaningi Mangwana said Muchengwa was removed from office following recommendations by a tribunal that probed his suitability for office.

“The tribunal has reported its findings to His Excellency … and has recommended that Commissioner Frank Muchengwa be removed from office for acts of gross misconduct. Accordingly, His Excellency the President acting in terms of section 187(8) of the Constitution has removed Muchengwa with immediate effect,” Mangwana said.

Mangwana told NewsDay that Muchengwa faced many allegations of gross misconduct and corruption.

“There were many allegations of gross misconduct around issues of getting cases and not processing them, corruption, and disclosing confidential information received from whistleblowers not knowing which was major, but those were the allegations,” he said in a telephone interview.

Muchengwa was once a police officer and was head of the Commercial Crime Unit at Harare Central Police before joining Zacc.

Meanwhile, Zacc has impounded nine buses involved in smuggling of goods at the country’s borders.

“Some of the smuggled goods found on the buses include an assortment of alcoholic drinks, blankets, bags containing new clothes, shoes, washing powder and energy drinks worth hundreds of thousands of United States dollars,” Zacc said in a statement.

“Investigations are still in progress. Zacc would like to thank whistleblowers for their continued support in exposing corruption and urge Parliament and the Justice, Legal and Parliamentary Affairs ministry to expedite the completion of the Public Interest Disclosure (Protection of Whistleblowers) Bill, 2022 whose principles were approved by Cabinet recently,” Zacc said.