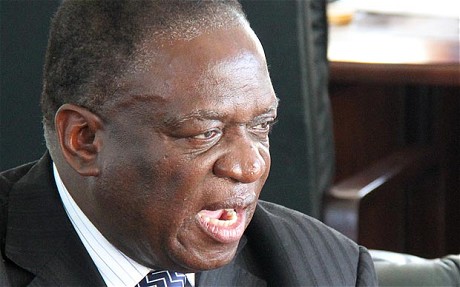 The Zanu PF politburo, the party’s de facto highest decision-making body outside congress, although the central committee is constitutionally empowered to do so, called for an extraordinary congress after a proposal from party secretary for administration Ignatius Chombo on Wednesday last week. At Mugabe’s instigation at the meeting, provincial structures subsequently met last weekend and unanimously agreed to hold the special congress in Harare.

Zanu PF was scheduled to hold its next congress in 2019. Senior Zanu PF officials told the Independent that although Mugabe initially considered amending the party constitution to pave way for the appointment of three deputies, including Grace, he is now increasingly leaning towards a direct replacement of Mnangagwa with Sekeramayi. The idea of elevating Grace to the vice-presidency, just like the notion of her taking over from her husband has, according to informed sources, been shelved as Mugabe and Grace’s strategists do not want to promote and reinforce the perception of a Mugabe dynasty in the making.

“This coming Zanu PF extraordinary congress will endorse and reaffirm Mugabe as the unrivalled and uncontested leader of the party and candidate for the presidential election next year. “It will also be about succession: it is designed to remove Mnangagwa and replace him with Sekeremayi. That is the first thing. The second one is this will allow Mugabe to strategically realign his team, for instance by engineering new central committee and politburo changes, in the context of the current political environment, succession and the forthcoming 2018 general elections.

“And third, it will also deal with the Grace issue. If all goes according to plan, she is not going to made vice-president in December yet as many think, but will be positioned to become one of the vice-presidents after Mugabe is gone. In other words, the plan is for her to be one of Sekeramayi’s deputies. She is not earmarked to succeed Mugabe in the scheme of things at all,” a senior Zanu PF official told the Independent.

“There are serious considerations that Grace, who has become a key figure in the succession matrix, should remain outside the presidium for now and continue with her role of stirring the succession pot as leader of the Women’s League.

“If she is elevated to the vice-presidency, it will reinforce the idea that Mugabe is treating Zimbabwe like a monarchy and wants to build a dynasty, while making it difficult for her to continue behaving like a succession prime mover.”

Another official said Grace would only feature in the top echelons of Zanu PF and power matrix after the elections if Mugabe and Zanu PF win.

“The plan is also that after winning the elections, Mugabe will hand over power to Sekeramayi who will then appoint Grace as one of his deputies with Phelekezela Mphoko or another Matabeleland representative. That way we will not have a situation in which Mugabe will be president and his wife one of the vice-presidents under him.”

Since her election as Women’s League boss in 2014, Grace has virtually become a kingmaker, having publicly influenced the ousting of former vice-president Joice Mujuru and many high-profile senior party officials in the run up to and after the party’s December 2014 congress.

However, Zanu PF officials say the issue is complex because the Women’s League and some provinces are still pushing for a constitutional amendment to ensure one of the vice-presidents is a woman.
Mugabe in July seemed to warm up to the idea, just like having three vice-presidents, although the situation has been rapidly changing.

The proposal, senior officials say, is likely to be adopted, but will be parked and implemented if or when Sekeramayi takes over.

In the meantime, Grace will be left to continue influencing succession from outside the presidium and cabinet. Although many expected Grace to be appointed to cabinet since 2014, Mugabe has left her outside formal government structures to stir the succession pot at the party.

Officials close to Grace say she is not keen to land the presidency after careful consideration of the issue with her allies, but wants to use her influence to determine her husband’s succession to protect her personal, family and business interests in the post-Mugabe era.

Although Sekeramayi is considered a reluctant leader and weak, lacking force of personality and charisma, he has for some time been considered a dark horse in the succession race.
However, his name was propelled into the centre of the succession debate than ever before by Higher Education minister Jonathan Moyo at a Sapes Trust Policy Dialogue Forum on June 1. Moyo said Sekeramayi was a far better candidate to succeed Mugabe than Mnangagwa.

The extraordinary congress could be Mnangagwa’s political burial ground and Sekeramayi’s pedestal to power, although the race still remains open because its outcome largely depends on Mugabe’s presence. Given Mugabe’s old age, ill-health and frailty, Zanu PF officials fear anything could happen to him anytime and change the course of events.

Zanu PF’s 10 provinces have called for the extraordinary congress with all of them endorsing Mugabe as the undisputed party leader and their presidential election candidate next year.

The special congress will focus on endorsing Mugabe and making changes to the Zanu PF presidium as well as other top structures like the politburo and central committee.

Section 30 of Zanu PF’s constitution says an extraordinary session of the party shall deliberate only on those matters for which it has been specifically convened.