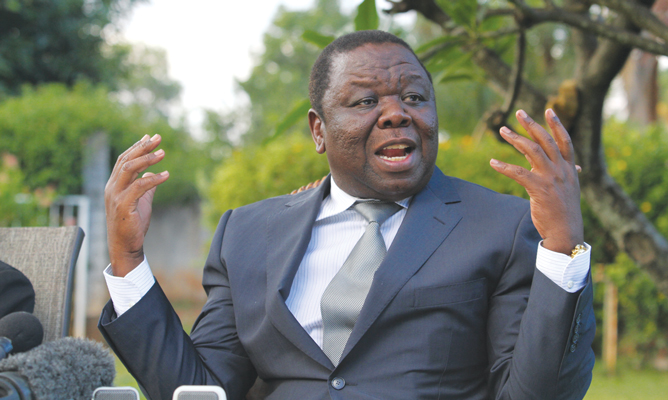 BY PRIVILEGE GUMBODETE
THE ruling Zanu PF has disclosed that the late MDC founding president Morgan Tsvangirai played a crucial role in “sanitising” the ouster of late President Robert Mugabe in a military coup in November 2017.

Just before Mugabe resigned, Tsvangirai addressed thousands of people gathered outside Parliament building where he urged the former Zanu PF leader to “step down immediately to avoid impeachment”.

Mugabe resigned before he was impeached.

Tsvangirai succumbed to cancer of the colon in South Africa in February 2018.

Before his death, Mnangagwa and his deputy Constantino Chiwenga visited Tsvangirai’s Highlands home and pledged to pay his medical bills.

After his death, Mnangagwa told mourners at Tsvangirai’s home that government would look after the former trade unionist’s family.

“We kept Mugabe in office when the threat was from the West. You do not open your armpits when the enemy is at the gate. So when we saw that there was a chance to deal with Mugabe we dealt with Mugabe in a very surgical manner where even themselves (opposition) became part of that process,” Mutsvangwa said during HSTv’s Freetalk show where opposition Citizens Coalition for Change (CCC) politician Job Sikhala was also a guest.

“We built a broad, united front and it is also to their credit that for a change there was wisdom just that the wisdom died with the demise of Tsvangirai then afterwards the party was afflicted with its usual falling to the Western countries.”

At the time, Tsvangirai is alleged to have lobbied Western diplomats to play down the coup and embrace Mnangagwa.

Mutsvangwa claimed that there was no love-lost between Tsvangirai and the military leaders although they blocked him from grabbing the presidency in the 2008 elections.

The military, then headed by Chiwenga, led a terror campaign against opposition supporters after Tsvangirai defeated Mugabe in the first round of the 2008 elections, culminating in a bloody rerun.

Tsvangirai later pulled out of the race citing persecution of his supporters, a development which led to the formation of a coalition government after the international community refused to recognise Mugabe’s victory.

In 2019, CCC leader Nelson Chamisa, then MDC-T leader, told crowds at Tsvangirai’s memorial service at Hamunikwa village in Buhera that Mnangagwa had promised Tsvangirai a transitional government that would oversee the implementation of democratic reforms.

“He (Chamisa) does not know the role played which his former president Tsvangirai discharged in the birth of the second republic. The MDC previously had tried to unseat Mugabe as he became hold to corruption and responsible for all this litany of abuses he is talking about,” Mutsvangwa said.

“The war veterans who have always been the game changers in the history of this county did…We decided to do it because we have a pedigree in that we made Zimbabwe. That is our pedigree and when things began to go wrong, we intervened as war veterans.”

Reports in the Zimbabwe Independent in early 2000 said Mnangagwa and Tsvangirai had also worked together in a plot to remove Mugabe. Then Zimbabwe Defence Forces commander General Vitalis Zvinavashe was removed from office in 2003 after being fingered in the plot.

The plot, according to media reports, was to send Mugabe to Malaysia so as to facilitate a resolution of Zimbabwe’s economic crisis.

Zvinavashe, who denied involvement in the plot, was later deployed to the Zanu PF politburo and given a political role. He  died in 2009.