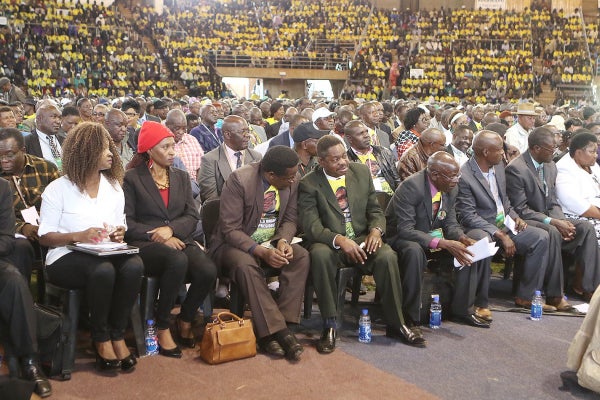 The original ZLP was the brainchid of the late liberation war stalwart, Wilfred Mhanda, whose Chimurenga name was Dzinashe Machingura.

“This is what we have realised that as long as we remain subservient to a political party, it has got its own ideologies, its own leadership that if we try to be critical, it has to take the practices and culture of that political party and we won’t be able to actually play our role as an overseer of the liberation objectives,” Sadomba said.

He was accompanied by Abraham Tsikwa, Karen Kazingizi, Patrick Makombe and Abel Marimo.

The war veterans, most of them who played a huge role under the ZNLWVA in the ouster of the late former President Robert Mugabe to pave way for Mnangagwa, also accused the incumbent of monopolising the liberation war into a party project for personal gain.

They argued that the liberation struggle did not belong to Zanu PF and, therefore, it was wrong for ZNLWVA to be an arm of a political party.

The new outfit said Zanu PF had been hijacked by people who don’t understand the ethos of the liberation struggle, a group of people who are in their posts because of Mugabe’s political gamesmanship to retain power.

They also cast aspersions on Mnangagwa’s liberation war credentials, claiming that when he was released from jail, he went straight to study law, and not joint the liberation struggle.

He was brought back into the fold by Mugabe, the ex-fighters claimed.

Sadomba said it was time for the nation to be brave and speak out against corruption and challenge bad things regardless of who was behind them, saying Mutsvangwa’s ZNLWVA had failed.

“We did not fight the war so that we can have political violence or corruption. We fought for democracy and to get out of oppression in the hands of Ian Smith, but not to continue under the same in a Zanu PF government. The Zanu PF we knew during the war is not the same we know now,” he said.

Sadomba added that war veterans operating under the confines of Zanu PF cannot stand up against the rot that has rocked the revolutionary party, referring to the alleged missing of US$15 billion diamond revenue and US$3 million Command Agriculture funds.

Kazingizi said real war veterans had been sidelined and replaced by opportunists.

She also lifted the lid on Mnangagwa’s liberation war credentials.

“Cde Emmerson was taken out of jail, according to the history I know, and when he left prison, he did not go to the war. He went to study law. After finishing law, he was taken by Mugabe after the former President had removed all the real comrades. The people who had chosen Mugabe to lead the war at the Mgagao declaration, he had finished them all, and replaced them with newcomers,” Kazingizi said.

In 2008, war veterans led a violent and bloody Zanu PF campaign against the opposition MDC after the late MDC leader and presidential candidate Morgan Tsvangirai had won the first round of presidential elections.

Kazingizi said they now wanted to exorcise the ghost of violence by stepping out of Zanu PF.

“If a true war veteran did that (beat up people in violent election campaigns), they must come forward and confess, because during the war, we saw them being shot if they killed unarmed civilians,” she said.

The war veterans said they were working to rebrand themselves.

The ZLP leaders said political violence and corruption have become so entrenched under the watch of Zanu PF, in the process dividing the nation and leaving a trail of poverty and empty national coffers, which are being looted by a few.