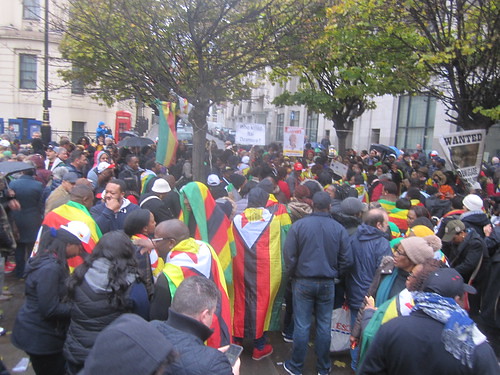 The fantasy world of Zanu PF is summed up by the luxurious mansion in Harare built by the Chinese for Vice President Chiwenga.

Embroiled in another ugly divorce case, General Chiwenga roped in the army to evict his latest wife, Marry, from their marital home in the capital’s luxurious Borrowdale Brooke area.

He said the house was of ‘sentimental value’ to him – but apparently not enough to want to move back in there, resorting instead to the nearby Golden Villa Peacock Hotel owned jointly by the Defence Ministry and a ‘Chinese investor’.

But his lavish new ‘white house,’ as its been dubbed, is now apparently ready for its ‘president’. Truckloads of goods and groceries have been delivered. Poor unMarry has gone to live with her parents (see: https://www.thezimbabwemail.com/zimbabwe/vp-chiwenga-builds-new-luxurious-mansion/).

The hubris of Zanu PF can also be seen in the ravings of the party’s Director for Information and Publicity, Tafadzwa Mugwadi, who says Zimbabwe could soon become a one-party state which will regard any opposition as rebellion and retaliate (see: https://news.pindula.co.zw/2021/03/05/we-will-soon-make-zimbabwe-a-one-party-state-and-view-people-like-chamisa-as-rebel-leaders-zanu-pf-official/).

Every time Mugwadi opens his mouth he causes trouble. The sort of trouble that has now seen the national chair of the MDC Alliance Thabitha Khumalo attacked in her Bulawayo home by two men who broke in during the night. Khumalo was beaten with a knobkerrie and stabbed in the hand. She said she believed the attack was politically motivated (see: https://www.newzimbabwe.com/mdc-alliance-top-politician-thabitha-khumalo-attacked/).

An article in Newsday by Paidamoyo Muzulu goes to the heart of the Zanu PF problem. ‘This is the age of making our own reality’, he says (see: https://www.newsday.co.zw/2021/03/mathema-masks-education-mediocrity/).

Muzulu points to the new standards created by Zanu PF for unemployment: not bound by international norms but pretending that Zimbabwe is among the top countries for employment.

‘Our unemployment level is below 10%, according to the national statistical agency. The irony of the low unemployment rate is that the government is busy saying it wants to create jobs, secure investment, build new industries. The question is: Who are the jobs being created for? It becomes clear that Zimbabwe has masked its unemployment figures in order to hide the rot, a comatose economy amid the plunder by political elites and their hangers-on.’

He continues: ‘The government says everyone who is economically active is employed. This includes vendors, those tending their fields and everyone else who in the preceding three months had some casual employment — they are all employed. This thinking is further projected in the hare-brained idea that Zimbabwe would be an upper-middle class economy by 2030. It is an administration hell bent on ticking the boxes — having quantitative growth at the expense of the living standards of its people.’