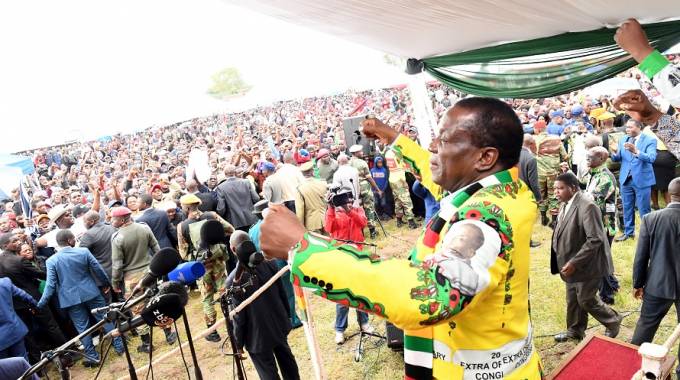 At least 30 000 people are expected to converge at Sakubva Stadium, while an estimated crowd of over 15 000 will be waiting to hear the President’s message at Murambinda.

The star rallies marking the beginning of the President’s all-out campaign follows the recent successful launch of the Zanu-PF business-friendly manifesto.

Observers have roundly welcomed the manifesto, which resonates with the Government’s thrust of attracting Foreign Direct Investment and creating a middle income economy by 2030.

The manifesto is running under the theme “Unite, fight corruption, develop, re-engage and create jobs”.

Zanu-PF Manicaland secretary for administration Cde Kenneth Saruchera confirmed that all was set for the two mega rallies.

He said logistics were in place to ensure that the two rallies were a resounding success.

“Everything in terms of logistics is now in place,” said Cde Saruchera.

“We have organised transport to ferry people from different areas and the venues of the two rallies are Sakubva Stadium and Murambinda Growth Point. Party structures are already on the ground and for the Sakubva rally, I can confirm that there will be an overflow as we are expecting a crowd in excess of 30 000.

“As for the Murambinda rally in Buhera, another crowd of over 15 000 is expected to gather and hear wise words from our President. Just like in Mutare, all logistical arrangements are now a gear up in Buhera as we are not leaving anything to chance.”

Cde Saruchera said they feel greatly honoured to be the first province to receive the President on his campaign trail.

He said they would prove that they deserved the honour and trust shown by President Mnangagwa in the province by claiming all the seats in the forthcoming elections.

“We want to live up to the trust shown to us by the President by delivering all the constituencies and taking all the wards in the province,” said Cde Saruchera.

“We want to demonstrate that we deserve this trust and honour by our performance in the elections. As a province, we are in full support of our President and First Secretary Cde ED Mnangagwa.”

Cde Saruchera said the statistical data from the recent primary elections showed that the party was poised for victory.

“About 96 percent statistical data from all the constituencies and wards showed that things went on well contrary to fabrications that the process was chaotic.

“All the complains that were raised are being investigated and we also draw a number of lessons from these primary elections. One of the fundamental lessons we draw is that we now know the expectations of people from elected officials.

“We also learnt that when you are elected, you are elected to serve the people and if you do not go back to the same people, they will not elect you in the next election. The amount of interest displayed by the people showed that people are now interested in participating in issues of national interest.”

Regarding the primary elections re-run in Buhera West and Chipinge Central, Cde Saruchera said: “In Buhera we completed everything and results are now there, but the official announcement will be made by the national political commissar. In Chipinge Central, people did not vote in three wards due to some challenges.”

Zanu-PF has crafted its manifesto centred on re-engaging the international community, attracting investment and creating jobs to improve the livelihoods of the people.

President Mnangagwa’s call that Zimbabwe is open for business has seen investors flocking into the country in search of opportunities. Government has already secured investment commitments worth over $11 billion.

After the Manicaland rallies, the President is expected to address more rallies in all the country’s provinces.