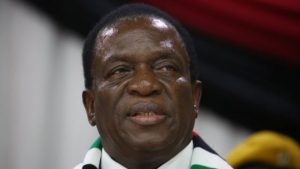 THE chaos that characterised the Zanu PF Tsholotsho North constituency primaries could turn out to be a bane for the party, with some supporters vowing to play a bhora musango on the “imposed” candidate, Sibangumuzi Khumalo.

Disgruntled party supporters told Southern Eye yesterday they would rather vote for the opposition to fix Zanu PF leaders, who disregarded the “voice of God”.
Party leader, President Emmerson Mnangagwa (pictured) has popularised the mantra “the voice of the people is the voice of God”, pledging to abide by the wishes of the people.

But disgruntled ruling party members accused Mnangagwa’s subordinates of doing the opposite, setting the stage for protest votes against the party in general elections set for July 30.

“We were made to wait until 11pm on April 28. After that, and at that hour, people were told to leave and they were to be notified, as to the next voting date. We were surprised that on April 30, people were told late that there was voting that was taking place.

“Some of the villagers were coming from as far as 30km away from the places, where the voting was taking place,” the supporter said.

“We have thousands of party members in the various cells in Tsholotsho North. To have a stupid number of 1 700 voters being said to have voted in the primaries is an insult to the name of the party. We would rather ‘donate’ the seat to the MDC, so that we all lose out,” she said.

Information at hand shows the ruling party has 17 000 party members in its cell registers for Tsholotsho North, but only 2 431 members voted in the primaries, where Khumalo garnered 1 664 votes against his rival Believe Gaule’s 767 votes.

Gaule’s supporters claimed that their candidate had been decampaigned and labelled an MDC member ahead of the polls.

Gaule, is seen in some Zanu PF circles, as a top Mnangagwa ally following his involvement with the President during the ill-fated 2004 Tsholotsho Declaration, whose plan was to effect a “smart internal coup” on the then President Robert Mugabe.

At the time, Gaule was the provincial chairperson and a close ally of the constituency’s former legislator, Jonathan Moyo.

Moyo is currently in exile since the toppling of Mugabe in November last year.

He has taken to social media to fight what he says is a junta government led by Mnangagwa.

“It is clear the voting was not transparent. Only three cells out of 44 cells voted. This accounts for close to 2 000 members who were disenfranchised by the chaos that we saw in Tsholotsho. There were people who were given maize to vote for Khumalo. Open vote-buying was at play. There was also rigging, as those army officials were carrying ballot papers in their vehicles,” a member said.

Efforts to have the matter resolved amicably by the Zanu PF commissariat department have proved futile, as the party has shut its doors on any cries for a revisit of the primaries.

“We are saying as party members, we need to revisit the Tsholotsho North constituency primaries despite the party saying the primaries are a closed chapter. We are not happy as party members. The party leadership must not test our patience, which is wearing thin. If they can’t find a solution, we will speak out at the ballot on July 30,” declared one supporter from Ntuluka in Tsholotsho.