ZANU PF youths yesterday fired a salvo at South African opposition Economic Freedom Fighters (EFF) leader Julius Malema, ordering him to stop poking his nose in the country’s affairs and calling him a nobody wanting to soil good diplomatic relations between the two neighbours. 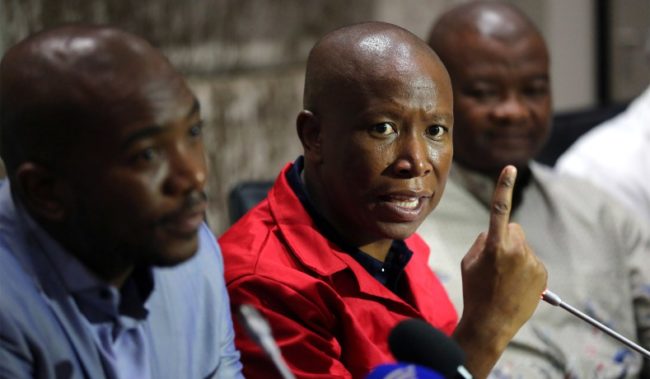 The Zanu PF youths were responding to an attack on President Emmerson Mnangagwa by Malema over his decision to compensate former commercial farmers for developments made on farms before they were displaced by the late former President Robert Mugabe in 2000.

Several activists and opposition MDC Alliance members were forced into hiding while some were abducted and tortured by State security agents before the protests. Malema has called for the closure of the Zimbabwean embassy in South Africa as a way of forcing the Harare administration to respect human rights.

The ruling party’s acting deputy youth secretary Tendai Chirau said Malema’s continued attack on Zanu PF confirmed his “ill-advised and futile” objective to undermine the strong and healthy diplomatic relations between the two countries, which “are bonded by revolutionary ties”.

Addressing a Press conference in the capital yesterday, Chirau said Malema was not qualified to comment on human rights abuses and the compensation of white former commercial farmers in Zimbabwe.

“Malema himself is struggling for significance in South Africa and, therefore, lacks qualifications to authoritatively comment on Zimbabwean issues,” Chirau said.
“Zimbabwe is a sovereign State with a democratically-elected government under the leadership of His Excellency (President Emmerson) Mnangagwa and as such, will not brook any interference from puppets and their handlers.”

Chirau said by Zanu PF standards, Malema was a “puny and absolute political nonentity” whose nostalgia for his wasted glory days with the African National Congress had pushed him into bed with the equally disgraced G40 clique.

The Zanu PF youth leader said complaining of compensating white former commercial farmers for improvements made on the farms prior to land reform exposed Malema for his lack of historical knowledge of Zimbabwe and regional geopolitics.

“The Zimbabwe government multi-tier partnership to compensate the white former farmers fulfils requirements of the Constitution of Zimbabwe which obligates the State to pay compensation for improvements that were on the land when such land was acquired,” Chirau said.

He said Zimbabwe was not a jungle that thrives on capricious laws of natural justice, but a constitutional democracy in which those violating the law should be punished.