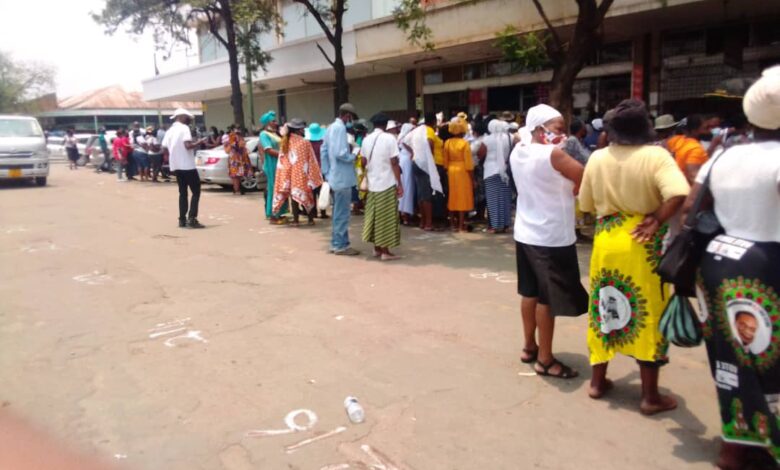 The youths are reportedly charging US$2 for each vending space and also issuing Zanu PF membership to the vendors.

On Tuesday, the group had a clash with illegal foreign currency dealers who operate in the area citing that the area belonged to them.

The area popularly known as ‘World Bank’ due to the illegal foreign currency dealings that used to take place there, used to be a flea market before the Bulawayo City Council (BCC) shut down the market as part of measures to decongest the CBD in light of lockdown restrictions to contain the spread of the Covid-19 pandemic.

When CITE visited the area, Thursday, part of 5th Avenue between Herbert Chitepo and Fort Street had been barricaded with vendors seen selling various wares.

Sources who spoke the publication said those who were allocated vending bays were also being issued with Zanu PF membership cards.

“At some point, we’re told to chant the slogans ‘Pamberi neZANU PF’,” she said.

The ruling party has set an ambitious target of garnering 5 million votes in the 2023 elections.

Contacted for a comment, the ZANU-PF chairperson for Bulawayo Province, Obert Musindo said he hasn’t received the report.

“The City of Bulawayo is aware of illegal occupation by unauthorized personnel on the area along the 5th Avenue between Herbert Chitepo and Fort Street,” said Mayor Mguni.

“Please note that 5th Avenue is a public road for vehicular and pedestrian traffic and not a designated vending site and members of the public are warned not to participate in this exercise as they will be evicted from the area and risk losing their hard-earned money,” he said.

He said the City of Bulawayo does not condone such behavior as it violates the statutes of the country and the City’s by-laws.