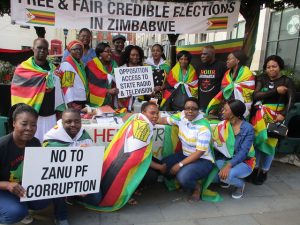 Former South African president Thabo Mbeki has urged Mnangagwa to invite a neutral mediator to preside over the talks with the opposition in Zimbabwe. Why has the government media not reported this?

The persistent distortion of the truth by the Herald, Chronicle and ZBC must be changed if we are ever to have anything like an honest debate in Zimbabwe.

At issue is an interview Mbeki gave to the SABC. The Herald makes out that he entirely supported Mnangagwa’s position on talks with other parties. Nowhere in their version is there a hint of any criticism of Mnangagwa (see: https://www.herald.co.zw/mbeki-speaks-on-zim-dialogue/).

But looking at other reports of the interview it is clear that the Herald totally ignored Mbeki’s comment about a neutral mediator: ‘They (MDC) agree in principle to that get-together, but (say) let it be convened by somebody else. So, I’m saying that I hope that’s going to happen, it’s something that should happen.’ (See for instance: https://news.pindula.co.zw/2019/06/17/mbeki-backs-chamisa-tells-ed-its-not-enough-to-win-an-election/).

Unpalatable to government media was Mbeki’s implicit criticism of Mnangagwa for continuing the charade of talks without the MDC. Mbeki, who helped to establish the government of national unity, knows full well that Chamisa is ready for talks under a neutral convenor and Mbeki accepts that this is the way forward.

As he says: ‘For us who are trying to develop our countries, you need maximum unity in order to address a number of national challenges. So it can’t be enough to say, ‘I won elections and that’s it’. I’m saying an initiative such as has been taken in Zimbabwe is correct, and I hope Zimbabweans will indeed be able to come together including the MDC. The MDC must be part of that process. It’s important that as a continent we deal with this matter in that way.’

Even Zanu PF is not united behind Mnangagwa’s hard line. Speaker of the National Assembly Jacob Mudenda says stability can only be guaranteed if another government of national unity is established. Speaking at the funeral of Morgan Tsvangirai’s eldest daughter he said: ‘We enjoyed serenity of politics during the GNU. That spirit must come back. It must come back.’ He appealed to political leaders ‘to find each other for the good of the nation’ (see: https://www.newzimbabwe.com/mudenda-pleads-for-gnu-calls-on-ed-and-chamisa-to-find-each-other/).

FOR THE RECORD: 29 signed the register.