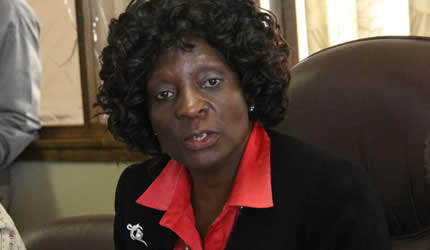 Nqobile Tshili Bulawayo Bureau—
THE Zimbabwe Electoral Commission (ZEC) has said it is unacceptable for political figures among other people acting as commissioners of oaths to pre-sign affidavits used to register for the 2018 elections. Political figures that include councillors and MPs across the country’s political divide are allegedly signing affidavits beforehand and giving them to people who need proof of residence to just fill in their names and identification numbers on the forms.

There is speculation that some of the political figures are distributing the pre-signed affidavit on partisan lines. In an interview yesterday ZEC chairperson Justice Rita Makarau said it was illegal for those acting as Commissioners of Oaths to pre-sign the affidavit forms. She said affidavit forms confirming an individual’s place of residence can only be signed on the spot. “Affidavits cannot be pre-signed, it’s not allowed. Those that want to sign the affidavits should be at the registration centres,” she said.

Justice Makarau said the electoral commission has dealt with cases where those in authority were pre-signing affidavit forms. “We have heard about it from our provincial elections officers. We have told them that it is unacceptable and it must be stopped. We do not have information on the political parties that are doing it, but we have been told by our officers that they have seen people who are issuing out pre-signed affidavits,” said Justice Makarau.

To ease the challenges faced by those who do not have proof of residence, ZEC has engaged the Ministry of Home Affairs so that it accords voter registration supervisors Commissioner of Oaths status. This means a person without proof of residence who wants to register can now approach ZEC offices and fill affidavit forms confirming their place of residence.

ZEC on Sunday entered Phase Two of the Biometric Voter Registration exercise and more than 1,2 million registered during the first phase while 28 515 were turned away. ZEC said those who were turned away had wrong documents such as the driver’s licence, defaced identity documents, being under age or failed to produce proof of residence.