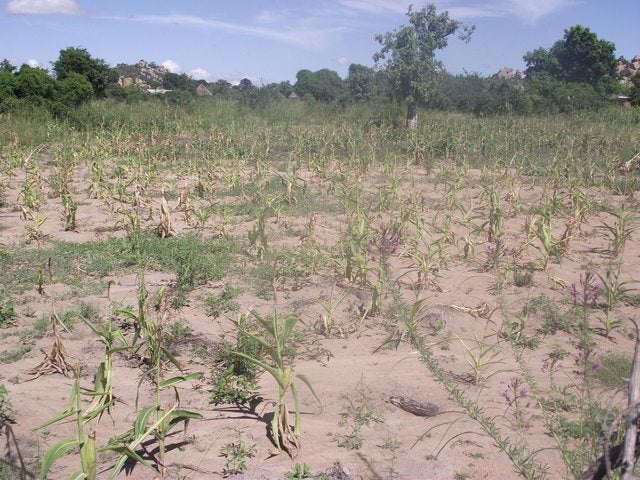 By Moses Mugugunyeki in Zhombe

Villagers in Zhombe have lost hope on their crops amid fears of an acute shortage of food.

Speaking to Standardpeople during a Zimbabwe Red Cross Society (ZRCS) food distribution exercise at Sidakeni High School in Kwekwe district’s ward 7 on Friday, villagers said most of their crops were a write-off and were expecting more food aid.

“As you can see, we have nothing to celebrate because our crops failed as a result of poor rains,” said Mafios Bhera of Dhibha village.

“We tried to replant, but the crops failed, and we have lost hope on the crops in the fields.”

Shadreck Dzama, a village head, said there was need to expand the food aid programme to include all villagers.

“We welcome the food aid, but we would like to see every villager benefiting because we are all getting nothing from the fields,” Dzama said.

“I have seen a lot of people without food in the village and I have assisted them. People tried to replant, but the rains failed them.”

ZRCS secretary-general Maxwell Phiri said his organisation was helping the most vulnerable members in the community.

He said the food aid programme, dubbed the “Lean Season Assistance”, was reaching out to 58 525 people in 19 out of 33 wards in Kwekwe district.

“Our programme is guided by the district drought relief committee and the selection of beneficiaries is done at local level, we have a ward committee that includes traditional and community leaders as well as Red Cross volunteers,” Phiri said.

“We are partnering the World Food Programme in the USAid-funded programme, which started last month and ends in June.”

Aid agencies say at least eight million Zimbabweans out of a population of 14 million face starvation this year due to drought and a collapsing economy.