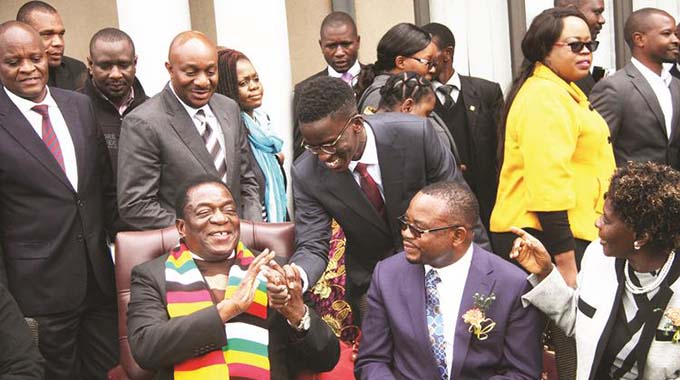 President Mnangagwa flanked by Primary and Secondary Education Minister Professor Paul Mavima and the ministry’s Secretary Dr Sylvia Utete–Masango meets investors at the Presidential Education Indaba at Celebration Centre in Harare yesterday. The theme of the Indaba was “Promoting access to education through infrastructure investment in schools”. —(Picture by Justin Mutenda)

Tendai Mugabe Senior Reporter
Zimbabwe has entered a new era in which all investment is welcome and its safety guaranteed, and where education should be used as a conduit for employment creation and revival of the economy, President Mnangagwa has said.

He said his Government was supportive of investment models that facilitated increased private sector participation in the education sector through Public Private Partnerships.

President Mnangagwa made the remarks while officiating at an infrastructure investment indaba organised by the Ministry of Primary and Secondary Education in Harare yesterday.

The indaba sought to harness investment in the education sector, especially in infrastructure development in line with the President’s mantra that Zimbabwe is open for business and his vision of creating a middle-income economy by 2030.

“As a nation, we are now in a new era where education has ceased to be a cost and must now be understood as an opportunity for investment and consequently a conduit for employment generation and economic revival,” said President Mnangagwa.

“The transformation of the education sector brings with it a change of mind-sets and fosters human capital development. To that end, this indaba is a very important engagement, given the demands upon every sector to positively contribute to the building, development and modernisation of our country in line with vision 2030.

“Education investment must, therefore, be less fragmented or piecemeal and more coordinated, strategic and holistic.

“Infrastructure development within our education institutions at every level is not an end in itself, but must facilitate the development of relevant skills and competencies for the economic needs of today and the future.

President Mnangagwa said the country welcomed partnerships and investments in the provision of primary and secondary education in line with the “Zimbabwe is open for business” mantra.

“In this regard, I exhort investors, business communities, development partners, parents, community leaders and teachers, among others, to identify space within the context of evolving economic possibilities within the education

“Let us be innovative and creative, and make the teaching and learning process an exciting inclusive and comfortable experience for learners and the educators alike.”

President Mnangagwa urged the Ministries of Primary and Secondary Education and Higher and Tertiary Education Science and Technology Development to forge synergies that appropriately nurture learners responsive to the present economic challenges.

“I, therefore, challenge stakeholders to invest in infrastructure, conscious of our need to increase our skills and competencies in these areas of specialisation.

“In the same vein, I equally exhort schools to equally prioritise and promote investments in construction and the equipping of science related infrastructure, ICT infrastructure, sporting facilities, water and sanitation, as well as renewable energy infrastructure within our primary and secondary schools.

“Meanwhile, educators should stop the practice of dissuading learners from undertaking science, technical and related subjects. At family level, parents and guardians must make concerted efforts to identify, inculcate and nurture scientific mind-sets amongst children from a very young age.”

President Mnangagwa said it was his fervent hope that the competency based curriculum introduced in schools would result in a robust education system that churned out graduates that meet the country’s socio-economic needs of today and the future.

Primary and Secondary Education Minister Professor Paul Mavima said the private sector was welcome to access land and build schools countrywide on the condition that they gave a certain portion of bursaries to intelligent, but yet less privileged learners.

During the event, President Mnangagwa proved to be an accessible leader as he allowed Progressive Teachers Union of Zimbabwe secretary general Mr Raymond Majongwe to present him with a letter of concerns by teachers on that platform.

Mr Majongwe acknowledged that it was not the right platform to do that, but he was happy that President Mnangagwa accepted the letter.

The gesture by President Mnangagwa attested to his word during his inauguration on November 24 last year that he would be a listening President.