Business Reporter
THE value of Zimbabwe’s exports rose by 20,93 percent to US$647 million in November last year, which helped the country to significantly cut its trade deficit for the month.

Although imports increased marginally, Zimbabwe registered a remarkable decline in the trade deficit, which means a significant amount of hard currency was retained in the economy.

“During the same period, imports decreased by 4,07 percent to US$683 million from US$712 million in October 2021,” the Zimbabwe National Statistical Agency (Zimstat) said.

Notably, although the Covid-19 pandemic has negatively impacted global supply chains, the scenario has been a blessing in disguise for some domestic producers, who have seen growth in volumes.

While some goods have become difficult to procure and more expensive, a good number of suppliers and producers have become inward looking, which has boosted volumes of local manufacturers.

Over time, the country needs to turn trade deficits into surpluses as such disparity means Zimbabwe is buying more goods and services than it sells abroad (imports exceed exports).

The Southern African country saw exports of food and beverages slightly more than double to US$19,7 million in November 2021 from US$9,8 million a month earlier. 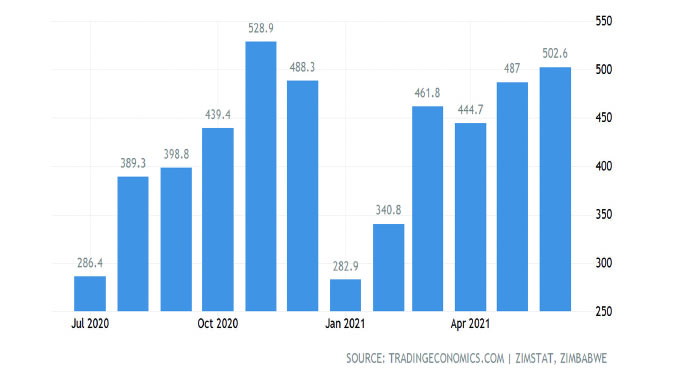 Transport equipment exports also increased to US$2,84 million from US$1,2 million in October. The two items contributed to the dramatic rise in exports during the month under review.

The leading export commodity during the review period was semi-manufactured gold constituting 32,8 percent of total exports while nickel mattes, ores and concentrates accounted for 29,8 percent.

In monetary terms, the export value of semi-manufactured gold increased to US$168,6 million from US$145 million the previous month.

Meanwhile, the contribution of tobacco, another export heavyweight, constituted 13,1 percent of total exports in November 2021 compared to 10,3 percent the prior month.

Zimstat further highlighted that in November 2021, Zimbabwe exported 13,9 million kilogrammes of tobacco valued at US$61,3 million in October 2021.