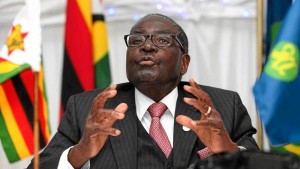 Harare – Zimbabwean war veterans have reportedly claimed that President Robert Mugabe is improperly getting credit for the controversial land reform programme, adding that the veteran leader had “no land reform policy” during the height of the reforms.

Thousands of white commercial farmers and their employees were displaced and left without sources of income during the fast-tracked agrarian reforms that were masterminded by Mugabe’s administration in 2000.

According to the Zimbabwe Commercial Farmers Union, more than 4000 white farmers were affected by the often violent farm invasions.

Some of the white farmers that were kicked out of their properties during the agrarian reforms have now set base in neighbouring countries such as Malawi, Mozambique and Zambia.

According to New Zimbabwe.com, the Zimbabwe National Liberation War Veteran Association Secretary General, Victor Matemadanda, said that the ex-freedom fighters played a crucial role in the southern African country’s land reform programme. But, he said, they had since become victims of the land reform exercise.

‘Smith killed some of us’

Matemadanda alleged that Mugabe was quiet about the land reforms until the former liberation fighters “took matters into their own hands” and invaded white owned commercial farms.

He said that prior to the wide spread farm invasions, the former freedom fighters were met with police brutality at the behest of the veteran leader.

“Smith killed some of us because of the land issue. Mugabe chased us when we invaded the farms earlier and when some of us got the small pieces of land, Mugabe chased us again with offer letters. Look at what happened in 2000, the veterans of the Chimurenga struggle were met with police brutality sent by Mugabe and chased away from the farms,” Matemadanda was quoted as saying.

He said that war veterans who occupied the white owned farms at the height of the land reforms were now landless, as they were being chased away by Mugabe’s government as well the First Lady Grace.