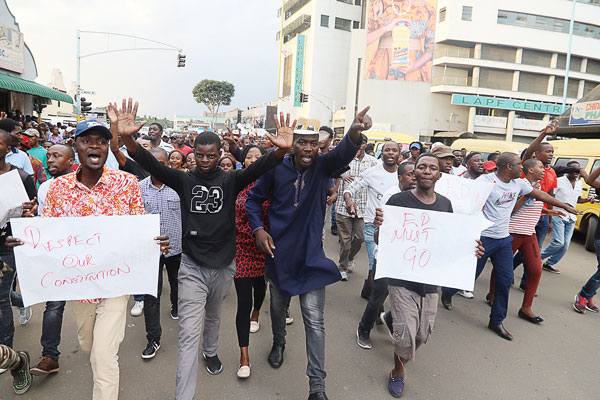 YOUTHS yesterday described Zimbabwe’s multi-party democracy as a farce, saying the continued mushrooming of new political parties was not ending the country’s political and economic problems.

This comes at a time that the country is already preparing for the 2023 harmonised elections, with new political parties, including soccer star Peter Ndlovu’s All People’s Party, emerging two years before the plebiscite.

Youth Forum Zimbabwe director Ashton Bumhira told NewsDay that while plurality was a plus for good governance and democracy, it was not working in the country as it served to divide the opposition vote.

“Plurality is good in a democratic system, it is one of the primary tenets of democracy. However, ours is a unique situation, where the mushrooming of political parties has not really helped our democracy as the majority are there to just make up the numbers,” he said.

“In most cases, most of the smaller mushrooming political parties are only there to legitimise and sanitise the electoral and political processes for the benefit of the incumbent.

“In the current set-up, the losing opposition parties joined the Political Actors Dialogue (Polad) and are just being rewarded for participating in the elections. Polad has not yielded results for the ordinary people, it has neither legitimacy nor legal mandate, but rather it has been reduced to a cosmetic show of democracy and unity.”

Bumhira said it was a sad development that more parties were now sprouting as the country heads towards 2023 elections.

“In Zimbabwe, it is either you support Zanu PF’s President Emmerson Mnangagwa or MDC Alliance’s Nelson Chamisa. With all due respect, most of the other smaller opposition political parties are closer to the MDC, or are mere factions in terms of their identity and ideology.”

Social rights activist Pride Mkono said:  “While the Constitution in section 67 envisages that every individual has a right to form or join a political party of their choice, the reality dictates that Zimbabwe needs political reforms more than new political outfits. Without political reforms to level the playing field and put Zimbabwe on a path towards democratic consolidation, all these purported fresh political outfits are a waste of everyone’s time.”

Political analyst Tafadzwa Munemo said: “Multi-party democracy is constitutional, but to be honest, political reforms are crucial to be able to realise acceptable election results. What is dangerous is a binary approach to politics.”

Analyst Sydney Chisi said multi-party democracy had always been a mirage in Zimbabwe.

“Most of the political parties that have been participating in elections were either Zanu PF outfits or were too weak to dislodge Zanu PF. The only time we got a formidable party that put Zanu PF and multiparty democracy to test was when Morgan Tsvangirai’s MDC was formed. Polad has nothing to disagree to and they make opposition parties weaker,” Chisi said.