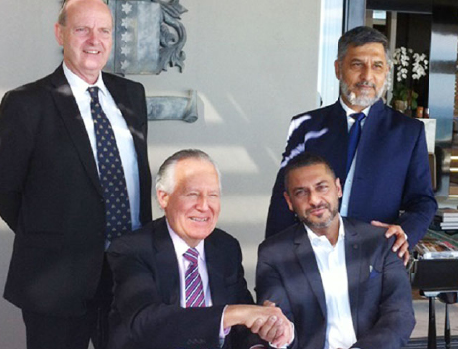 PRESIDENT Emmerson Mnangagwa’s unrelenting drive to mobilise Foreign Direct Investment (FDI) for the capital-starved southern African country through opaque deals has attracted the interest of some of the world’s most controversial business moguls.

During his first spell in power after assuming the presidency through a military coup that toppled long-time ruler Robert Mugabe last year, the state media reported that Mnangagwa “chalked up investment commitments worth US$11 billion”. However, the bulk of it was mobilised through murky deals.

The Zimbabwe Independent has extensively reported on multi-billion-dollar deals Mnangagwa has clinched with controversial business characters, including Zunaid Moti, Lucas Pourolis and Jacco Immink, among others.

Last week, Moti, a Mnangagwa associate who has invested in excess of US$300 million through an opaque deal to set up a chrome extraction and processing plant in Zimbabwe along the mineral-rich Great Dyke, was arrested in Germany on charges that he defrauded his former business partner Alibek Issaev an estimated US$35 million in a sham mining deal in Lebanon in 2013. Moti, who is chairperson of the Moti Group, a family-run business believed to be worth several billions of dollars, is resisting extradition to Russia where he faces extortion charges.

When Mugabe was at the helm, Mnangagwa pushed for the interests of the Moti Group in parliament. He attracted criticism from the then former higher and tertiary education minister Jonathan Moyo for pushing for the reversal of a raw chrome export ban for the benefit of his controversial business associate.

The Moti Group, through its investment vehicle in Zimbabwe, African Chrome Resources (ACF), was exempted from paying import duty. The company imported 12 million litres of fuel duty-free in 2014. Under the country’s laws, ventures granted “National Project” status are allowed to import equipment duty-free.

In June this year, Mnangagwa’s crony Pourolis signed a controversial US$4,2 billion deal with government, paving way for his investment vehicle Karo Resources to grab mineral claims stretching over 23 903 hectares previously held by Zimplats along the Great Dyke.

However, Tharisa Plc senior partner Bobby Morse in July told the Zimbabwe Independent that the US$4,2 billion cost of the project was plucked from thin air by government, raising questions on the exact value of the controversial investment. The Pourolis family holds a 42% stake in Tharisa Plc which has only managed to mobilise US$8 million for implementation of the platinum project.

When Mugabe was still at the helm, Pourolis wrote to the then mines minister Obert Mpofu in 2013, expressing interest to invest in the lucrative platinum sector.

“We have noted with great interest your announcement of 12 February 2013 regarding the repossession of 27 948 hectares of land from Zimplats for allocation to new investors.

Through this letter, I would like to re-affirm Karo Resources Ltd’s desire, commitment and technical and financial ability to invest in Zimbabwe’s platinum group metals (PGM) mining sector,” reads part of the letter seen by the Independent.

In 2005, Pourolis made a fortune after acquiring South Africa’s Impala Platinum subsidiary Elandsfontein Platinum Project for US$15 million, before selling it two years later for US$1,1 billion to Xstrata in a speculative deal. Karo Resources is registered in Cyprus and Guernsey, a tax haven blacklisted by the European Union in December last year.
In 2011, the state-controlled Herald warned Zimbabwe had been alerted of dubious investments, including that of Pourolis, after his company Kameni was reported to the South African Police Service’s commercial crimes unit for “false claims”.

The company had then been trying to raise seed capital for its projects in Kalkfontein and Great Dyke in Zimbabwe.

In June this year, a relatively obscure South African company, Nkosikhona Holdings, signed a staggering US$5,2 billion deal with government to transform coal into fuel, cashing in on the mineral resource after roping in Canadian consortium Magcor International to implement the project. The South African company, which was registered in 2013 and has a questionable track record, signed the deal with the government through Verify Engineering Private Limited — an agent of the Higher Education Ministry — in May.

Magcor — an engineering and international development consortium of companies registered in Canada with a presence in the United States, Philippines, China and Africa — has, however, effectively seized control of the project in a capital-for-equity deal with Nkosikhona.

The deal involves coal production and the setting up of a beneficiation plant for the production of liquid fuels, fertilisers and chemicals. The plant will be established in Lisulu, along the Zambezi basin, where coal is available in abundance.

The deal has also raised questions on the technical and financial suitability of Nkosikhona and Verify to roll out the project, considering that the controversial South African outfit company and its Zimbabwean partner have not undertaken any significant infrastructure development projects in the past.

The then Higher Education minister Amon Murwira dithered on the shareholding structure of Vectol Limited, the new outfit constituted by Magcor International and government when he was quizzed by the Independent last month.

“Vectol Zimbabwe is a new company we have formed with our partners who are Nkosikhona under Magcor. Maybe the equity will change from time to time. Maybe over time we will increase our stake,” Murwira said then.

“The shareholding structure remains confidential and I cannot divulge, that will be up to the directors. I do not think it is information that is of public interest. I know, but I am not going to get overexcited and divulge that.”