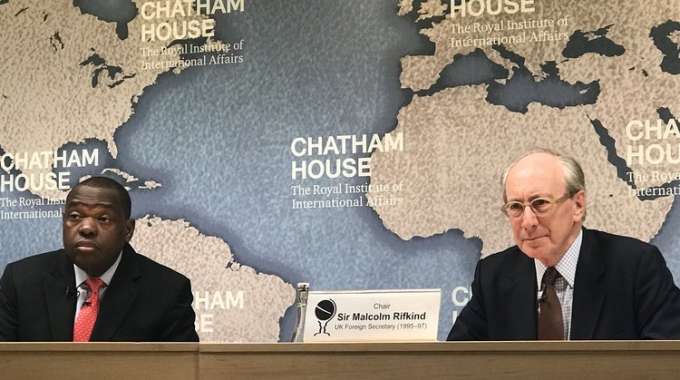 Dr Sibusiso B. Moyo Special Correspondent
We extend our hand of friendship as we seek symbiotic relations and not just donations. Instead of donations and aid, let us co-create prosperity as we make it easier for countries to pursue their commercial and other interests without hindrance.
Zimbabwe went through a great ideological metamorphosis in the period after 24 November 2017.

Tomorrow, the 24th of April 2018 marks exactly five months since His Excellency, President Emmerson Dambudzo Mnangagwa took the oath of office on 24 November 2017.
I bring you greetings and well wishes from the people of Zimbabwe.

Allow me to recap an important aspect of Zimbabwe’s past relations with your country.
In the course of Zimbabwe’s national affairs, political life and governance, there have been many and surprising turns. We earned independence on 18 April 1980. The leaders of the new country delivered on their promises to the people through both domestic efforts and the generous assistance from the wider community of nations.

Things took a turn for the worse with the unexpected repudiation of all colonial baggage by the then UK government of Mr Tony Blair; in particular the rejection of assistance to acquire land from colonial farmers to resettle the landless rural people of Zimbabwe. Independence had been bled for and won because land had been unlawfully taken from the native people.

In 2000, the Zimbabwe Government commenced the compulsory acquisition of land without immediate compensation. The UK government rallied international support and soon, Zimbabwe was a pariah state, the economy all but stagnated and local politics became poisoned and destructively adversarial.

Foreign intervention and sabotage contributed to domestic instability.The new dispensation in Zimbabwe is prepared to move away from this history of unfocused contestation.

There is a saying in Zimbabwe that chara chimwe hachitswanyi inda meaning one thumb alone cannot squash a louse.
This demonstrates that long before there was the modern State called Zimbabwe, our ancestors understood the values of synergies, partnerships, friendship and international commerce, and on the contrary, warned against isolationism, individualism and loneliness.

This is as true in social and community relations as it is in today’s complex international affairs. Our two countries (Zimbabwe and the United Kingdom) are bonded by an inseparable history. Instead of acting as a factor that divides us, this history must be our rallying point.

Of course, at times we will interpret that history in different ways and that is only to be expected.
We, however, need to emphasise our areas of convergence so that we build on them as a resource to tackle our differences. History has taught us that if it is interpreted parochially, it becomes toxic for all concerned.

A lot of questions have been asked about the events leading to 17 November 2017. I will explain these events by quoting the Burkinabe Captain, Thomas Sankara who said:
“ . . . at times it is critical to get the courage to turn your back on the old formulas and be courageous to invent the future”.
The spontaneous street manifestations that the world witnessed in November 2017 were a clear demonstration of this courage of our people to turn their backs on an unpleasant past and reinvent their own future, and face it without fear.

The new dispensation in Zimbabwe is characterised by the following elements:
1. National unity which is blind to race, colour, ethnic origin, creed etc.
2. End of isolationism by reclaiming Zimbabwe’s position in the family of nations
3. Re-engagement with friends from whom we had become estranged.
4. Urgent economic recovery, including opening up Zimbabwe to international investment that is protected through binding international agreements such as the BIPAS, increasing the ease of doing business, and other economic reforms, which may involve some painful ones.
5 .Civil and political reforms to transform the political landscape from incivility to friendly contestation which preserves the shared national interest.
6. Transparency in Government process such as in justice delivery, the tendering process and the fight against corruption
7. Developing a disciplined public service, including in the uniformed services.

To accomplish all of the foregoing, it is clear that Zimbabwe cannot do this through its own efforts alone. Re-entering the family of nations should enable Zimbabwe to achieve these ambitions. This is where Zimbabwe invites the United Kingdom to play a critical role both as a strategic partner in Zimbabwe’s re-integration into the family nations, and also in our bilateral efforts.

International isolationism should never be revisited, for we know what it has wrought us.
We have come to London to convey this new disposition of the new administration as our two countries march into the future together. I restate our renewed commitment to the rule of law as opposed to the rule by law. The preservation of private property rights is receiving priority attention from the administration of my Principal, President ED Mnangagwa who has emphasized the need to create an enabling and predictable environment in which to do business. The President has on numerous occasions declared that Zimbabwe is open for business.

Foreign direct investment is critical to Zimbabwe’s recovery efforts.
Zimbabwe is seeking partnerships and investors. There are many economic sectors where British investors can come on board which potentially are attractive to British investors. These include the traditional sectors such as tourism, agriculture, mining, construction and infrastructure development to the more recent sectors such as the Fourth Industrial Revolution.

Zimbabwe should never again be left behind or become a casualty of the Fourth Industrial Revolution.
The digital revolution has shrunk the distance between our countries, and it therefore a lot easier for us to engage in mutually beneficial exchanges.

Let us cooperate!
We extend our hand of friendship as we seek symbiotic relations and not just donations. Instead of donations and aid, let us co-create prosperity as we make it easier for countries to pursue their commercial and other interests without hindrance. In the multilateral field, Zimbabwe calls upon international financial institutions to reconsider their previous exclusionary stance in relation to our country.

One of the consequences of the descent into pariah status was that economic assistance to Zimbabwe was terminated. Zimbabwe could not service her debts.

As Zimbabwe begins to recover, we are mending relations with international financial institutions and the Paris Club of creditor nations. Just this last week in New York, I was with my colleague Minister Chinamasa as he went on to the Spring Meetings of the IMF and World Bank in Washington DC.

We are committed to engage these key institutions as partners for growth in Zimbabwe once more. Committing to clearing the outstanding debt with the World Bank and the African Development Bank, among others, should restore Zimbabwe’s fortunes.
Togetherness and re-engagement are incomplete without openness and transparency. Allow me to return to the land issue. I need not lecture you on the history and character of the relationship between our two countries which I am convinced you are all familiar with, particularly Sir Malcolm. I believe that he wrote a postgraduate thesis on land apportionment in Southern Rhodesia.

The land issue is the reason why our relations became poisoned. Settlement of who is owed what with regard to compensation should put to rest this major historical discomfort in our relations with finality. Engaging each other candidly on this issue is the beginning of the search for such finality.

From our perspective, land reform is irreversible and accomplished. But while recognising that land reform has, indeed been concluded and is indeed, irreversible, we are committed to unlearning the wrongs that have had a chilling effect on investment. Former farm owners must be compensated as Government has undertaken to do within the country’s laws. Crucially, the Land Commission must be empowered to conduct a full land audit so that the land reform programme benefits all who call Zimbabwe home, without discrimination.

Let us recall the commitment made by HE President Mnangagwa in his inauguration speech. He informed the world that he was taking office to complete the term of the former president. He felt obliged to seek a mandate, and to quote him: the voice of the people is the voice of God. Therefore, as Zimbabwe prepares for the general elections in July 2018, we reaffirm our commitment to openness and transparency in the run-up to, during and after the elections.

The Government has undertaken to abide by the rules and standards applicable for the holding of free and fair elections.
Politically motivated violence, hate speech and other forms of electoral malpractice will not be tolerated. Only under peaceful conditions can Zimbabwe have meaningful elections which will move the country forward together as a united nation. To underline this commitment, the President has committed to meeting with all political leaders to forswear that there will no violence in this year’s elections.

By embracing the foregoing practices in its election processes, Zimbabwe is demonstrating political maturity. As a newly reintegrated member of the family of nations, it is obligatory that Zimbabwe demonstrates that it embraces democratic values and practices.

Inviting members of the international community, both governmental and non-governmental to come and observe our elections shows that we have nothing to hide, and that we are disposed to accepting constructive criticism from others.
Even as some relations were fractured, in the broader international arena, Zimbabwe continues to be a member of the United Nations and a contributor to peace-building and peace-keeping efforts as required.

We are an African country, and a member of all of its various institutions. Zimbabwe is at peace with its neighbours and the world. There is therefore no contradiction in Zimbabwe’s rejoining the Commonwealth.

I am pleased to confirm that we are in the process of re-establishing our membership to this important institution to which we believe we will once again belong in due course.

We declare that we are committed to the goals of international peace and security, we want to promote global unity and internationally agreed development goals, and we pledge to continue to be an active member in the family of nations.
I affirm once again our unswerving commitment to international institutionalism both multilaterally and bilaterally.

In summing up, allow me to reaffirm my conviction that this is a propitious moment for us to put into good use the lessons of our history of divergent views for the betterment of our two countries (Zimbabwe and the UK).

I am faithful to the agenda set by my Principal, President ED Mnangagwa, who has asked me to spread the word that Zimbabwe is truly open for business.