The Institute for Security Studies has described as “unsurprising” the testimony by two Zimbabwean army generals who denied that troops killed six people on August 1 when the military was called in to crush protests following the country’s disputed elections. 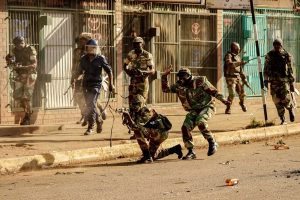 A soldier fires shots towards demonstrators, on August 1 2018, in Harare, as protests erupted over alleged fraud in the country’s election.
Protests in Zimbabwe’s historic elections turned bloody on August 1 as a man was shot dead during demonstrations over alleged vote fraud and the president appealed for calm. The man died after soldiers fired live ammunition during opposition protests in downtown Harare, AFP reporters saw.
/ AFP PHOTO / Zinyange AUNTONY

The generals, according to Associated Press, suggested this week that Zimbabwe’s opposition was responsible for the killings.

Giving oral evidence before the commission, Zimbabwe Defence Forces Commander General Philip Valerio Sibanda said he did not believe the army was responsible for the carnage, said an AFP report.

In an interview with News24, Senior researcher at ISS, Derek Matyszak said that the denials were not surprising as the army and police wanted to “justify their actions” by blaming the opposition, following the globally condemned killings.

On August 1, armed soldiers were deployed in the capital, Harare, to suppress a protest against delays in announcing results of the country’s first elections without former ruler Robert Mugabe.

Matyszak said that although commission’s terms of reference were skewed in favour of the military and police, it was highly likely to take a middle ground in its findings.

“Well, the police and military would justify their actions by blaming the opposition. The terms of reference already also say it was necessary for the military to intervene. The brute force, however, is not permissible under the country’s constitution, therefore the commission is likely to partially blame both the MDC (Movement for Democratic Change) party and the military in its findings,” said Matyszak.

A NewsDay report on Wednesday quoted Detective Chief Inspector Edmore Runganga, as telling the commission that the police were now close to arresting MDC’s Nelson Chamisa.

The Harare based detective placed a huge portion of blame on the MDC aligned supporters, as he claimed that they were in possession of small firearms.