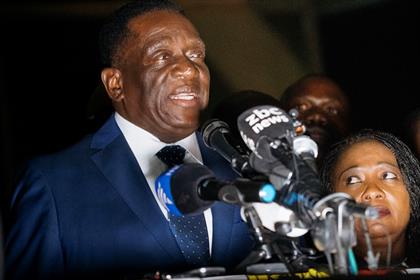 Some senior Zanu-PF officials are trying to find a successor to President Emmerson Mnangagwa just four months after he won elections, a newspaper reported on Tuesday.

Ruling party sources said some officials were worried Mnangagwa won’t see through more than one five-year term in office because of poisoning he suffered at a ruling party rally in 2017.

“This group is worried that Mnangagwa might not finish his current term due to the poisoning… and they are thus looking at having a successor in case that happens,” one unnamed source told the private Daily News.

Last year, at the height of ruling party power struggles, Mnangagwa became ill after eating contaminated food at a rally in southern Zimbabwe. His allies accused members from a faction linked to former first lady Grace Mugabe of trying to poison him.

‘Not supporting our president’

While president, Mugabe refused to name a successor and appeared keen to die in office, a situation that led to damaging factional wars that eventually saw him ousted.

The Daily News, quoting Zanu-PF insiders, said former loyalists of the president were “heavily involved” in a search for a potential successor. Other named officials confirmed there were some working against Mnangagwa.

“There are some people who are moving in their own direction, who are not supporting our president within the party,” senior official Ziyambi Ziyambi, who is also the justice minister, told the paper. “We are saying let the president serve his two terms.”

Victor Matemadanda, secretary general of the influential war veterans’ association, said: “There is no need to talk about succession now because the president is still serving his first term.”

In September Mnangagwa said that he would not cling to power. Under the constitution, he can stand for another five-year term in elections due in 2023.

“Even if the people would love me to the hilt, I will still go away because I believe constitutionalism is important,” local news website New Zimbabwe quoted him as telling US media on a visit to New York.