Zimbabwean security forces and unidentified gunmen have beaten and harassed dozens of people in a crackdown on the political opposition following a disputed election, Human Rights Watch has said. 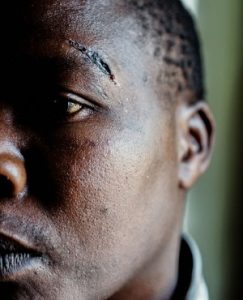 This man was allegedly injured as soldiers raided a bottle store in a township where he was drinking over the weekend in Harare. (Zinyange Auntony, AFP)

Zimbabwean security forces and unidentified gunmen have beaten and harassed dozens of people in a crackdown on the political opposition following a disputed election, Human Rights Watch said on Tuesday.

The allegation contradicts assertions by the government of President Emmerson Mnangagwa that it has abandoned the state-sponsored violence and intimidation associated with the rule of former leader Robert Mugabe. It comes after soldiers last week opened fire on rioters, protesters and bystanders in Harare, an opposition stronghold. Six people were killed.

Human Rights Watch said it had documented “numerous cases” of soldiers beating up people in some Harare bars and restaurants since the August 1 shootings. The military accused the people of undermining Mnangagwa because most votes in the Zimbabwean capital went to the opposition, according to the international rights group.

The group also reported a case in which six masked men broke into the house of a youth leader of the opposition, beat up some people and abducted two men.

“The masked men put the abducted men in a white double-cab truck and drove them to a secluded place along Masvingo road, then beat and kicked them for an hour before releasing them,” said Human Rights Watch, which documented similar cases elsewhere.

“All what we are realizing is that there is a lot of misinformation that is coming out from social media,” Moyo told ambassadors and others in Harare on Monday, according to The Herald.

He said the military is “a well-trained and very disciplined force” that at one point “took over the responsibility of policing,” a reference to the military takeover in November that led to the resignation of 94-year-old Mugabe after 37 years in power.

Also on Tuesday, 27 opposition activists who were arrested for allegedly inciting violence in Harare last week were released on bail.

The Zimbabwe Electoral Commission said Mnangagwa, who was a longtime enforcer for Mugabe, and the ruling party won the country’s July 30 election. Mnangagwa has urged the opposition to join him in rebuilding the country’s shattered economy, but the main opposition party alleges that the election results were rigged.