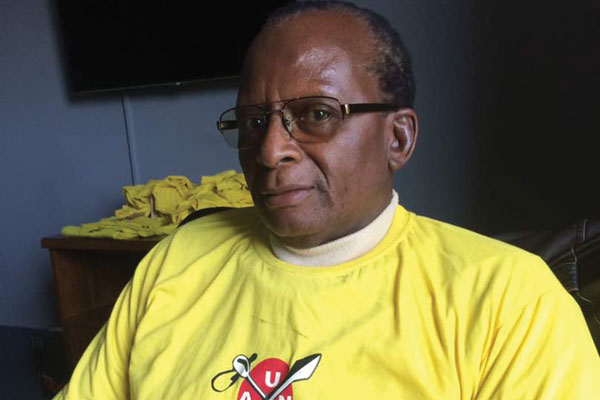 By THOMAS CHIDAMBA
THE United African National Council (UANC), one of the oldest political parties in Zimbabwe, says the country remains at war long after winning majority rule because it struggling under a dictatorship, amid rampant human rights abuses, political violence, State capture, corruption and a sinking economy.

Gwinyai Muzorewa, who now leads UANC, and is younger brother to the party’s former leader, Bishop Abel Muzorewa, yesterday told NewsDay that he had a political strategy to end Zimbabwe’s economic woes.

“Now we are fighting a different war. We are fighting a war against a bad economy, State capture, corruption and poverty. We are also fighting against human rights abuses,” Muzorewa, a US educated university professor, said.

Muzorewa said UANC was different from other political parties in the sense that it believed in true national unity and inclusive governance because “every Zimbabwean should be given an opportunity to serve their country”.

“So come 2023, the people will vote for the UANC because we have a politically mature and tested leadership. UANC is among the oldest, productive, liberation and official parties in Zimbabwe.

“It has accomplished much, although some major accomplishments have been distorted by the ruling party’s fear of this people-centred party. We started as movement in early 1970s like most political parties do. For instance, in 1972 Bishop Muzorewa led the nation to protest against continued white minority rule and we won that battle. This displayed Bishop Muzorewa’s nationalistic leadership skills and he became the party president,” he said.

Muzorewa said, contrary to Zanu PF’s clams, it was UANC that demanded one-man one-vote from the Smith’s regime.

“In 1978, UANC demanded majority rule, one-man, one-vote and we won that battle against the white minority regime.  President Muzorewa was a tough negotiator who did not believe in violence. He was a man of the cloth and a man of integrity.

“UANC once ruled the nation (from 1979 to 1980). This term was not completed because of the call on stakeholders to attend the Lancaster House Conference in London. Due to its love for peace and unity, UANC agreed to hold fresh harmonised elections in April 1980.

“As a party that respects democracy, UANC accepted defeat to Zanu PF in 1980. For President Muzorewa losing the elections was less important than losing national peace, unity and the prospects for democracy.

“Going forward, the party tried to form a coalition with other parties and form the United Parties, but that did not work well because UANC’s standards were too high for other parties who believed in violence, corruption and tribalism. UANC is non-racial, non-tribal, non-regional, non-violent, but all-inclusive,” he said.