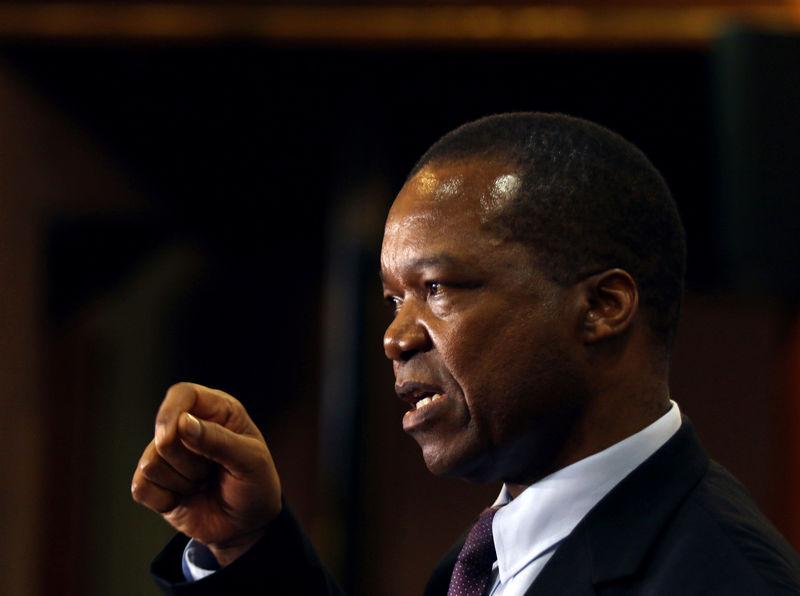 HARARE (Reuters) – Zimbabwe’s central bank governor said on Tuesday he expected the official exchange rate of a new currency to converge with that on the black market within three months, a move that could help increase the flow of dollars into the banking sector.

The country in February ditched its discredited 1:1 official peg to the U.S. dollar, and merged bond notes and electronic dollars into a transitional currency called the RTGS dollar.

The value of that currency was on Tuesday trading at 3.3 against the U.S. dollar and at 5 to the dollar on the black market.

The mismatch has seen companies and individuals holding dollars selling their money on the black market for higher premiums. Bankers and economists accuse the central bank of manipulating the official exchange rate, charges that central bank chief John Mangudya denied.

“I think within three months we will have a convergence of these rates of parallel market and interbank market rate,” Mangudya said during the launch of an economic report by a private sector company in Harare.

Zimbabwe’s economy has been crippled by a cash crunch that has caused shortages of fuel, food and medicine.

Mangudya, who was last week given another five-year term at the helm of the central bank, said the central bank would soon stop drip-feeding the market with some dollars to allow “willing seller, willing buyer” transactions.

The dollar shortages have seen some businesses charging prices in U.S. dollars while prices in RTGS dollars have soared, pushing up year-on-year inflation to a 10-year high of 66.8 percent in March.

The central bank chief, however, said he expected inflation pressures to ease from the last quarter of this year through 2020, citing a slowdown in month-on-month inflation.

But economists say inflation levels will remain elevated due to a devastating drought that hit crops this year and pressure on the exchange rate due to expected food imports.