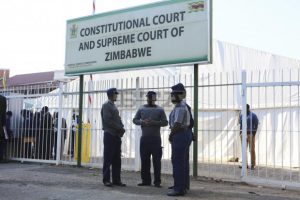 Zimbabwe’s constitutional court must rule by Friday on a challenge to last month’s historic presidential elections. The opposition claims “gross mathematical errors” in the victory by the ruling party incumbent.

Zimbabwe’s constitutional court must rule by Friday on a challenge to last month’s historic presidential elections. The opposition claims “gross mathematical errors” in the victory by the ruling party incumbent.

The opposition party in Zimbabwe is challenging the results of last month’s presidential election in the country’s constitutional court. The party is arguing that the electoral commission engaged in a vast, rigging campaign. NPR’s Eyder Peralta reports.

EYDER PERALTA, BYLINE: Lawyer Thabani Mpofu stood in front of the nine justices and detailed what he called a vast attempt to undermine opposition leader Nelson Chamisa. A statistical analysis of the election results, he says, showed huge irregularities. In some places, there were more ballots casted than registered voters. In others, tens of thousands more voted for president than they did for parliament. Some polling places had exactly the same results.

THABANI MPOFU: It’s like a kid was playing with the figures. That, with respect, is not how an election is conducted.

PERALTA: Chief Justice Luke Malaba did not seem convinced. He wanted to see the math behind the statistical analysis. He wanted the opposition to show discrepancies between tallying forms and what was inside ballot boxes. Mpofu said those documents, the so-called residuals, were likely manipulated.

MPOFU: If you go to the residual, you will drink from a poisoned well. Surely you can’t tell us we shouldn’t drink from that poisoned well if that is how the truth should be established.

PERALTA: The electoral commission lawyer, Tawanda Kanengoni, said the opposition is just making things up. They looked and corrected some of what he called insignificant clerical errors.

TAWANDA KANENGONI: There’s only a variance of 0.1 percent, and that does not change the outcome of the election.

PERALTA: The electoral commission did admit it has had to change final results several times and that, as improbable as it may be, 16 polling stations recorded the exact same results. The court will hand down an opinion on Friday. Eyder Peralta, NPR News, Harare.