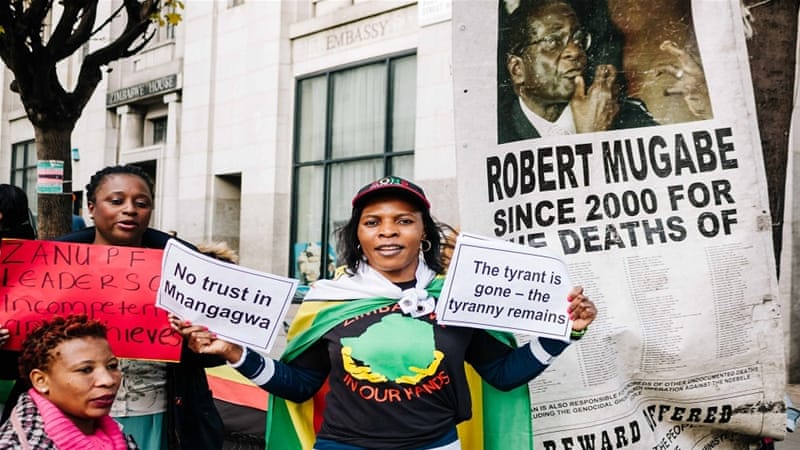 After 15 years of protesting against Robert Mugabe, the Zimbabwean diaspora in the UK will continue to rally against the ruling ZANU-PF party, accusing its leaders of being “dictators who only believe in themselves ruling”.

Mugabe stepped down as president after 37 years in power after a military takeover in November.

Members of the Zimbabwe Vigil Coalition, who have demonstrated outside the country’s embassy in London every Saturday since October 2002, say Emmerson Mnangagwa, Mugabe’s replacement, has filled his cabinet with “contaminated genocidaires from the armed forces and discredited former Mugabe freeloaders”.

Protester Rose Benton, who coordinates the group, told Al Jazeera from London: “There’s been no democracy in Zimbabwe since we started protesting … [instead] there’s a battle in ZANU-PF to keep power and control of the population.”

Mnangagwa assumed control of the party, and the country, following the bloodless military takeover beginning on November 15, which resulted in 93-year-old Mugabe’s forced resignation.

‘This was not a democratising coup’

Mugabe’s removal sparked scenes of jubilation in Harare, the capital of Zimbabwe, with many taking to the streets to celebrate.

However, that initial relief has evaporated, according to Dr Sue Onslow, a specialist in African history at King’s College London.

“There were hopes that Mnangagwa would reach out to other elements, to build upon the extraordinary multiple agenda of supporters of the opposition and civil society activists in those massive street demonstrations in Harare and Bulawayo, [but] these have been swiftly disabused,” she told Al Jazeera.

“This was not a democratising coup; it was a palace coup … It was a succession crisis.”

Critics have accused Mnangagwa of filling his 22-member cabinet with senior military figures and ruling party loyalists, but no opposition politicians.

“Right now we are still under dictatorship,” said Fungayi Mabhunu, a 46-year-old based in London. “It’s the same head with a different haircut.”

He left Zimbabwe for the UK in 2002 out of fear of being targeted by government security forces following his outspoken campaigning for the opposition Movement for Democratic Change (MDC) party.

He has not felt able to return since, but continues his activism alongside 50 or so other Zimbabweans every weekend “come rain, thunder, or sunshine” outside the embassy on the Strand.

From history, towards the future

Mnangagwa served as vice president in the previous government before his dismissal in October.

The 75-year-old and Mugabe had enjoyed a long-term political alliance born out of Zimbabwe’s war of liberation from Britain in the 1960s and 70s.

It ended when Mugabe, it was widely believed, attempted to position his wife Grace as his successor. A political crisis followed, culminating in the transition of power.

Mnangagwa’s allies have defended his appointments.

The new president has said he will hold elections in 2018, but protester Mabhunu remains sceptical.

“The results of that election are already in ZANU-PF offices,” he said. “[The election] will be rigged, that’s how they [ZANU-PF] operate. That’s why Mnangagwa was bold enough to say the vote will go ahead as planned.”

“The real solution starts with the international community tying much-needed funding and support to the implementation of democratic and institutional reforms,” he said.

“What we are doing here in London people cannot do back home, we believe the people of Zimbabwe need us to carry on our protest.

“Mugabe not being there gives us a very slim and fragile hope, but we need 20 steps to go forward, and we have only taken one.”

According to Onslow, reforms include increased electoral education, updating the electoral roll, a drive for voter registration, equality of access for all political parties in the media and international verification of results.

“It’s about developing institutions that build towards free and fair elections,” she said.

“[Otherwise] elections can be stolen months before the actual polling day, as the protestors outside the Zimbabwe embassy know very well.”

Meanwhile, those who continue to hold the London vigil say they will not give up. They will sing, dance, pray and protest every Saturday afternoon until their dream of a democratic Zimbabwe becomes a reality.

“We talk about ourselves as the voice of the voiceless,” said Benton. “We have to carry on, that’s our commitment.”