Hundreds of animals have died in Zimbabwe’s national parks, and major tourist attraction Victoria Falls has slowed to its lowest flow in decades.

Zimbabwe is experiencing its worst drought in years, with poor rains and erratic weather patterns impacting harvests and iconic wildlife and attractions across the country, and worsening livelihoods.Victoria Falls, which draws roughly one million tourists per year, has been reduced to a trickle in parts. While the falls typically slow down during the dry season between September and December, officials told Reuters this year had brought an unprecedented decline in water levels.Data from the Zambezi River Authority shows levels are currently at their lowest since 1995, with data from 2018/19 well below the long-term average.

The dire situation is creating more cause for concern that climate change could kill one of the region’s largest tourist attractions, according to Reuters.

However, despite the current state of the falls, Ilala Lodge – an accommodation provider located minutes away from Victoria Falls – said that even during low water flow periods, Victoria Falls is still “an impressive and spectacular natural phenomenon”. 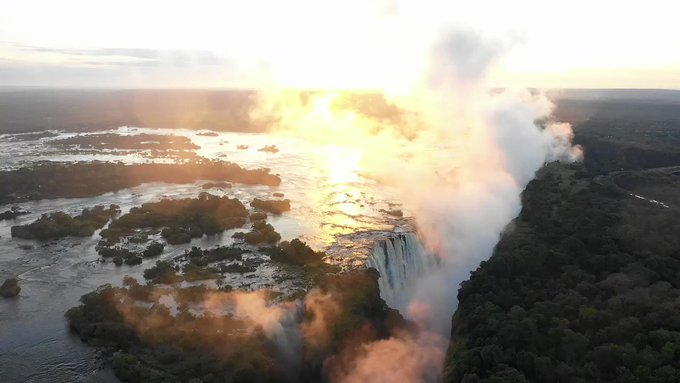 National park officials say this year’s drought is much drier and hotter than usual, Al Jazeera reported. As a result, the country’s national parks, which receive revenue from tourism and safaris, and wildlife across the country are suffering.

“We’ve been through some pretty bad ones,” David Macfarland of Mwinilunga Safaris told the outlet.

“When you see animals just walking along – an elephant, for example – and they just collapse on their legs, they don’t even roll over. They just collapse and die – it’s very emotionally moving.”

In November, The Guardian reported more than 200 elephants had died “over the last two months” due to a lack of water at the country’s main conservation zones in Mana Pools and Hwange National Park.

As a result, the country’s wildlife agency plans to move 600 elephants, two prides of lion, a pack of wild dogs, 50 buffalo, 40 giraffes and 2,000 impalas to save them from the drought, according to reports by Agence France-Presse.

Parks and wildlife authority spokesperson Tinashe Farawo told AFP that the operation to move the animals from Savé Valley Conservancy, a major park in south-eastern Zimbabwe, to three other reserves in the north of the country will begin during rainy season, when pastures flourish.

Farawo described the mission as “the biggest translocation in our history”.

“In urban areas, an estimated 2.2 million people are food-insecure and lack access to minimum public services, including health and safe water,” she said.