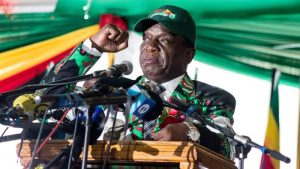 WASHINGTON — The Zimbabwe Election Resource Centre (ERC), a non-partisan think tank and advocacy institution on elections and democracy, has written a letter to President Emmerson Mnangagwa urging him to introduce a raft of reforms to ensure free and fair ahead of the crucial polls this year.

Mr. Mnangagwa has promised that Zimbabwe would hold “free, fair and credible elections this year”, adding that he would work hard to build a new democracy.

But ERC director Tawanda Chimhini says the president must walk the talk and ensure that the Zimbabwe Electoral Commission is independent and that prisoners and those in the diaspora are eligible to vote in the 2018 general elections.

Twenty two opposition parties under the banner of the Zimbabwe National Electoral Reform Agenda have held protests and petitioned the government to institute reforms since last year.

“In our considered view Zimbabwe is in the SADC and AU guidelines. We have looked at our laws and we have looked at the SADC guidelines everything that they are complaining about is clearly covered within our constitution and our laws. Our constitution clearly stipulates that ZEC is an independent body not subject to the control of anyone and that is in compliance with the SADC and AU guidelines and it clearly lays out the work of ZEC and our electoral laws they are complaint with … everything that is there.

“So, in so far as we are concerned we believe that we should not just waste resources doing cosmetic changes to the legislation that are already materially covered by the existing legislation.

He noted that “we had an indaba in Bulawayo where we deliberated on some of these electoral issues and the conclusion by then which was not challenged by most of these civic society organizations which were present when the experts and the legal experts who were making the presentations did their presentations was that we have a legal framework that adequately covers most of these areas and there was no need for us to go that route.

“However, let me say that at this juncture we cannot go into those specific issues regarding the diaspora vote, the right of the prisoners because after that indaba they decided to take that issue to court. So, we await the determination of the courts and the courts I understand is sitting on the 8th of January. Once that determination has been given we then know the direction to proceed.”

The Ministry of Justice in May 2015 gazetted the General Laws Amendment Bill (H.B.3, 2015) which sought to introduce before Parliament a raft of laws from across a battery of Acts and Statutes targeted at re-aligning such laws to the new 2013 constitutional dispensation.

The Bill, Ziyambi says, confirmed the “willingness by government to make the country`s electoral laws conform to the constitution.”

But Chimhini has a different take, “A lot more still needs to be done in ensuring effective citizen participation in governance processes that lead to the selection of public officials.” He added, “While the apparent constitutional re-alignment was long overdue, the manner in which the country approaches electoral changes remains haphazard and worrisome in that there is evidently little focus on strengthening our laws so that they could result in elections marked by admirable credibility and high democratic quality.”