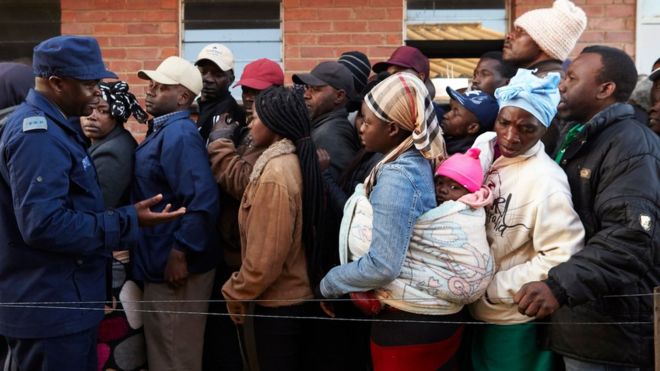 Foreign observers regard the election as a chance for Zimbabwe to break with its repressive past.

Long queues have formed at polling stations in Zimbabwe in the first general election since long-serving ruler Robert Mugabe was ousted.

Foreign observers have hailed the election as an opportunity for Zimbabwe to break with its repressive past.

The presidential election is expected to be a tight contest between the incumbent Emmerson Mnangagwa and his main rival Nelson Chamisa.

Parliamentary and local elections are also taking place on Monday.

Polls give Mr Mnangagwa, who heads the ruling Zanu-PF party, a narrow lead over Mr Chamisa, who leads the MDC Alliance. Both leaders are running for the presidency for the first time.

On Sunday, Mr Mugabe, who first came to power after independence in 1980, said he would not vote for his successor.

Mr Mugabe, regarded as one of the last “Big Men” of African politics, was forced out of office last November by Mr Mnangagwa with the help of the military.