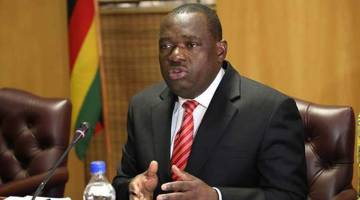 Harare (IANS): Zimbabwe’s Foreign Minister Sibusiso Moyo has denied the depiction of his country as being in crisis, saying activities were “stage-managed” to manipulate the perception of the international community.

He also denied that there were human rights violations being perpetrated by the state against its citizens, and challenged purveyors of such information to provide evidence of such activities, Xinhua news agency reported.

The negative reflection of Zimbabwe on social media was internally generated and intended to reach foreign destinations, particularly ahead of international and regional summits, The Herald newspaper quoted Moyo as saying.

“There is no crisis in Zimbabwe. There are challenges, which are found in any other nation,” he said.

He called on Zimbabweans to be patriotic and said that there should be dialogue whenever necessary to deal with sticky issues.

“The whole gamut of issues has been associated with activities that have been stage-managed to a point that they are seen as real. As Zimbabweans, we must be Zimbabweans first. That must be our priority.

“It is pointless to destroy your home as if you have a second country. If there are issues that are not better understood, there must be dialogue,” Moyo said.

The Southern African Development Community (SADC), of which Zimbabwe is a member, held its ordinary heads of state and government summit at the beginning of the week and did not raise any issues about the situation in Zimbabwe.

“Yes, as a nation like any other country we have got challenges, especially under COVID-19. We have had lockdowns. For the past two decades we have been under sanctions and the economy has been limping. There is climate change, a direct consequence of drought, Cyclone Idai and lower generation of electricity. So there is less generation of food in the agriculture sector. The government has by all means developed strategies to arrest some of these challenges,” he said.

Moyo said the negative perception of Zimbabwe has emanated from within to influence the international community.

“Negativity, which has recently mushroomed against Zimbabwe… Let us look at what is the source. The source is internal, generated locally by our own people for the purpose of social media consumption so that it can reach certain personalities, destinations and capitals, which should respond negatively to Zimbabwe.

“That is the scenario. The consumer is social media and mostly those people who are outside,” he said.