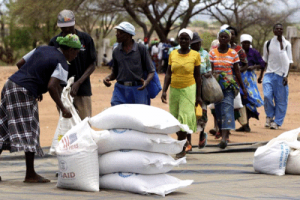 As a result of El-Nino induced poor rainfall season, Cyclone Idai and economic shocks, Zimbabwe is currently going through a number of humanitarian challenges. The drought condition that started in 2018 continue to affect large numbers of population both in rural and urban areas. Zimbabwe Vulnerability Assessment Committee (ZimVAC) 2019 Rural Livelihoods Assessment Report estimates that 5.5 million people in the rural areas are vulnerable and are at risk of food insecurity.

While Zimbabwe was responding to the food insecurity crisis, Cyclone Idai made landfall in the port city of Beira, Mozambique in March this year. Idai weakened to a tropical storm and moved to Zimbabwe causing heavy rains for many days and triggering floods which swept away hundreds of houses in the eastern and south-eastern parts of the country. Cyclone Idai caused damage and destruction to harvests and the Government declared a state of disaster in affected areas. Chimanimani, Chipinge and Mutare districts (Manicaland Province) were the most affected. According to reports, 172 fatalities had been confirmed, 4,884 people displaced, 327 missing and at least 53,999 people are believed to have been affected. Cyclone affected areas are also significantly affected by the drought and the deteriorating macro-economic situation.

Moreover, the current macroeconomic and political challenges in the country have contributed to further deterioration of the situation. Rising inflation has resulted in prices of essential food items such sugar, cooking oil and rice to increase by hundred per cent since June 2019. Power cuts of up to 18 hours a day and reduced availability of food, fuel and medicines make people even more vulnerable and in need of urgent support.
A shortage of liquid cash in the country has resulted in the use other payment methods such as eco-cash, smart cards etc., to purchase essential goods, adding further frustrations.