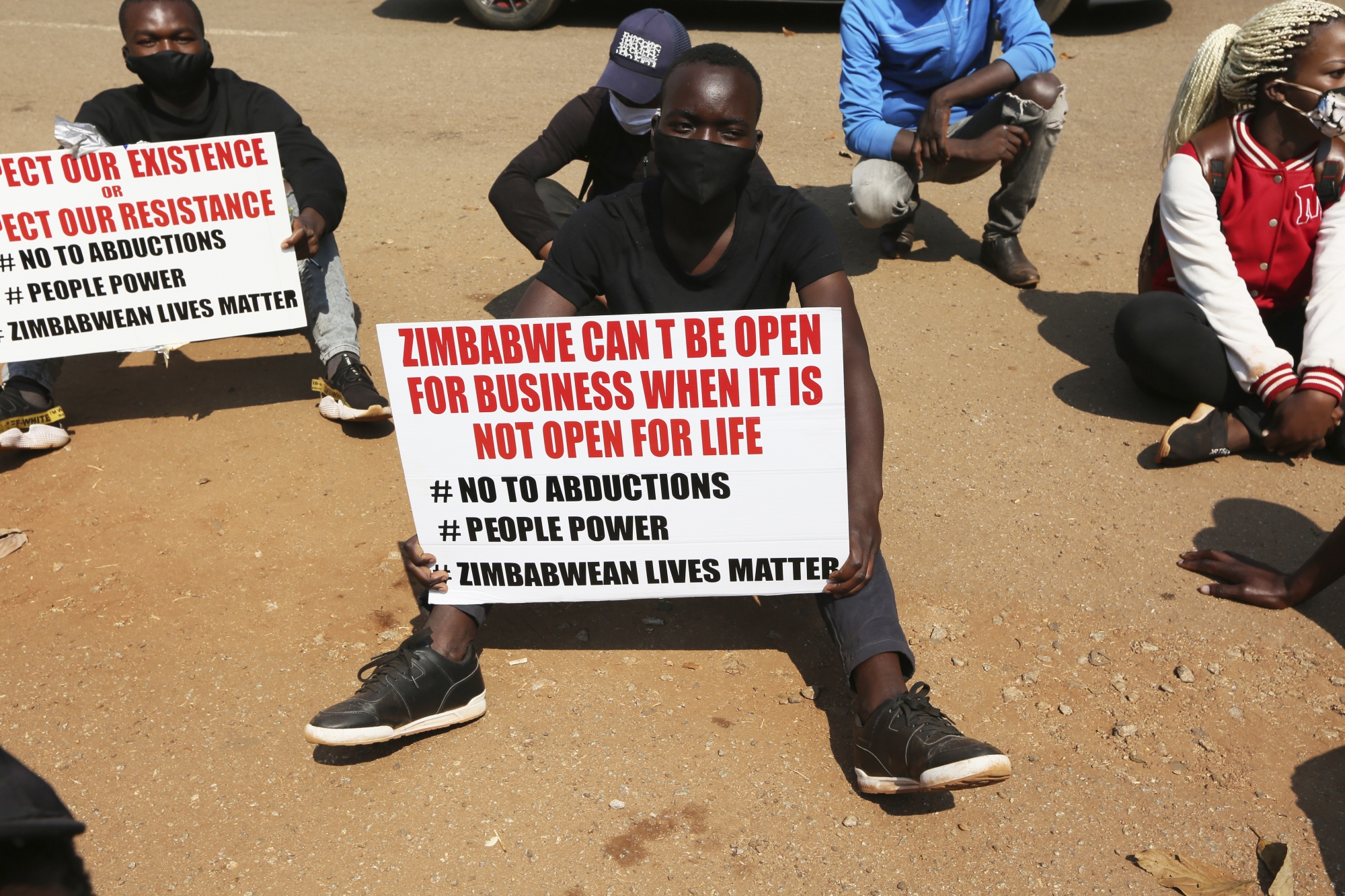 HARARE, Zimbabwe (AP) — Godfrey Kurauone, a Zimbabwean opposition official, sang a protest song at the funeral of a party member in July. For that, and other political charges, he spent 42 days in jail before the prosecution dropped one charge, and acquitted him of another charge of blocking traffic.

Hopewell Chin’ono, an investigative journalist who used his Twitter account to expose alleged government corruption, was held in the notorious Chikurubi maximum security prison for nearly six weeks before being granted bail on charges of inciting violence for tweeting his support for an anti-government protest.

Internationally acclaimed author and filmmaker Tsitsi Dangarembga spent a night in detention for standing by a Harare road and holding up a placard that said “We Want Better. Reform Our Institutions.”

From tweeting to Whatsapp texting, singing in public or marching in the streets, those who speak out against President Emmerson Mnangagwa’s government are finding themselves in trouble. Some have been abducted and tortured, according to human rights groups.

Zimbabwe’s deteriorating economy and reports of alleged corruption involving the procurement of COVID-19 protective equipment and drugs have stoked peoples’ anger at a government that promised reform and prosperity when it took power in 2017.

It appears the government is using restrictions imposed to combat the coronavirus to suppress political criticism, say human rights defenders.

“While the government lockdown has been extended indefinitely, human rights violations have steadily increased, suggesting that the government is using COVID-19 as a cover for violating fundamental freedoms and attacking perceived opponents,” said the local human rights group Zimrights in a joint statement with the International Federation for Human Rights.

Opposition officials, human rights groups and some analysts accuse Mnangagwa of abusing the rights of critics, using tactics as harsh as his predecessor, the late Robert Mugabe.

Mnangagwa and his officials deny the charges, saying they have carried out democratic reforms and they are justified in taking measures against people who are seeking to illegally overthrow the government.

Dozens of people — including lawyers, journalists, nurses, doctors, opposition members of parliament, and human rights activists — have been arrested and charged with violating COVID-19 lockdown rules, or for protesting on the streets and on social media.

ZimRights, a local organization, says it has recorded 820 “human rights violations” such as arbitrary arrests, assaults by state agents, attacks on journalists, abductions, “gunshot assaults” and dog bites between the end of March when the lockdown was introduced and August 9.

“These cases reveal a trend of human rights violations consisting of acts aiming to morally exhaust, silence, punish, impoverish, sometimes physically injure the targeted individuals, and exposing them to the risk of contracting the virus while arbitrarily detained in prisons,” said Zimrights in a joint statement with the International Federation for Human Rights.

It’s not even safe to criticize the president in bars, on public transport or on social media, according to the lawyers’ group, which said it has represented about 60 people charged with insulting the president since Mnangagwa took over following a coup that deposed Mugabe in 2017.

They include Milton Murairwa, a 31-year old police officer. He posted that “ED and his team must go,” on a Whatsapp group for police family members. Mnangagwa is popularly known by his initials ED. Now the police officer faces up to a year in jail or a fine if convicted on charges of “undermining the authority of or insulting” the president.

“We are seeing an increasingly worrying trend where authorities are abusing the law to persecute people perceived to hold views different to those of the establishment,” said Kumbirai Mafunda, spokesman for Zimbabwe Lawyers for Human Rights, which is providing lawyers to many of those arrested in the crackdown. Authorities, he said, “are using pre-trial detention as a form of punishment,” pointing to cases where those arrested are denied bail for lengthy periods.

Other government critics have faced insulting verbal attacks. The ruling party spokesman Patrick Chinamasa called the U.S ambassador Brian Nichols “a thug.” The country’s Catholic bishops were branded “evil” by the information minister, while the president challenged them to form their own party after they issued a pastoral letter accusing the government of political and economic mismanagement.

Hopes that neighboring South Africa, the region’s economic powerhouse, would help to find a resolution are vanishing after a delegation from the ruling African National Congress party came to Zimbabwe but only met ruling party officials and not the opposition and or civic organizations.

Zimbabwe’s government and the ruling party are not relenting.

Mnangagwa told party officials over the weekend that there is no crisis in Zimbabwe needing intervention and that the South Africans would not meet the opposition and NGOs.

Chinamasa, the ruling party spokesman, last week warned opposition leaders that “they should not be like children playing with fire. It will be very dangerous for them.” He accused the main opposition MDC Alliance party of training “renegades” overseas “to come and cause mayhem and violence.”

“It’s all part of tactics to wipe us out. We are being treated like a banned organization, we can’t even hold meetings without risking arrest,” he told The Associated Press, calling on neighboring countries to “help solve our crisis.”

Some activists are pushing back. A group held a street protest wearing replicas of red and white striped prison sweaters in August. Others are wearing the sweaters and posting pictures on social media.

Chin’ono, the journalist, walked out of Chikurubi Maximum Prison wearing his prison jersey when he was released on bail early September.

“It was a symbolism that yes, I might be out of Chikurubi but the current government has created a giant prison for all of us,” he told the AP. “Instead of being intimidated we are taking ownership of those symbols and making them ours.”

Copyright © 2020 The Associated Press. All rights reserved. This material may not be published, broadcast, written or redistributed.