Zimbabwe Has 2nd Largest Vendor Population In The World More than 60 percent of the Zimbabwean economy is informal making it the one of the biggest in the world, a recent study by the International Monetary Fund (IMF) has shown. 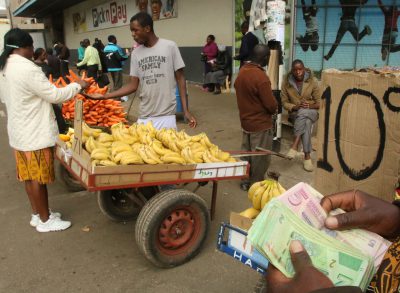 The southern African nation is ranked second after Bolivia (62.3 percent of GDP) in a working paper titled Shadow Economies Around the World: What Did We Learn Over the Last 20 Years?

Austria with 8.9 percent, and Switzerland with 7.2 percent are as the most formal economies, according to the research which covers 158 countries.

“The shadow economy includes all economic activities which are hidden from official authorities for monetary, regulatory, and institutional reasons. It reflects mostly legal economic and productive activities that, if recorded, would contribute to national GDP.”

Zimbabwe’s economy has over the past two decades rapidly informalised as formal businesses fold because of a difficult operating environment.

Government has been considering to tax the sector which is estimated to be worth between $3 billion and $7 billion. But analysts warn that taxing informal businesses will only cripple them. – The Source