Zimbabwe has an election coming up. Is political violence brewing? 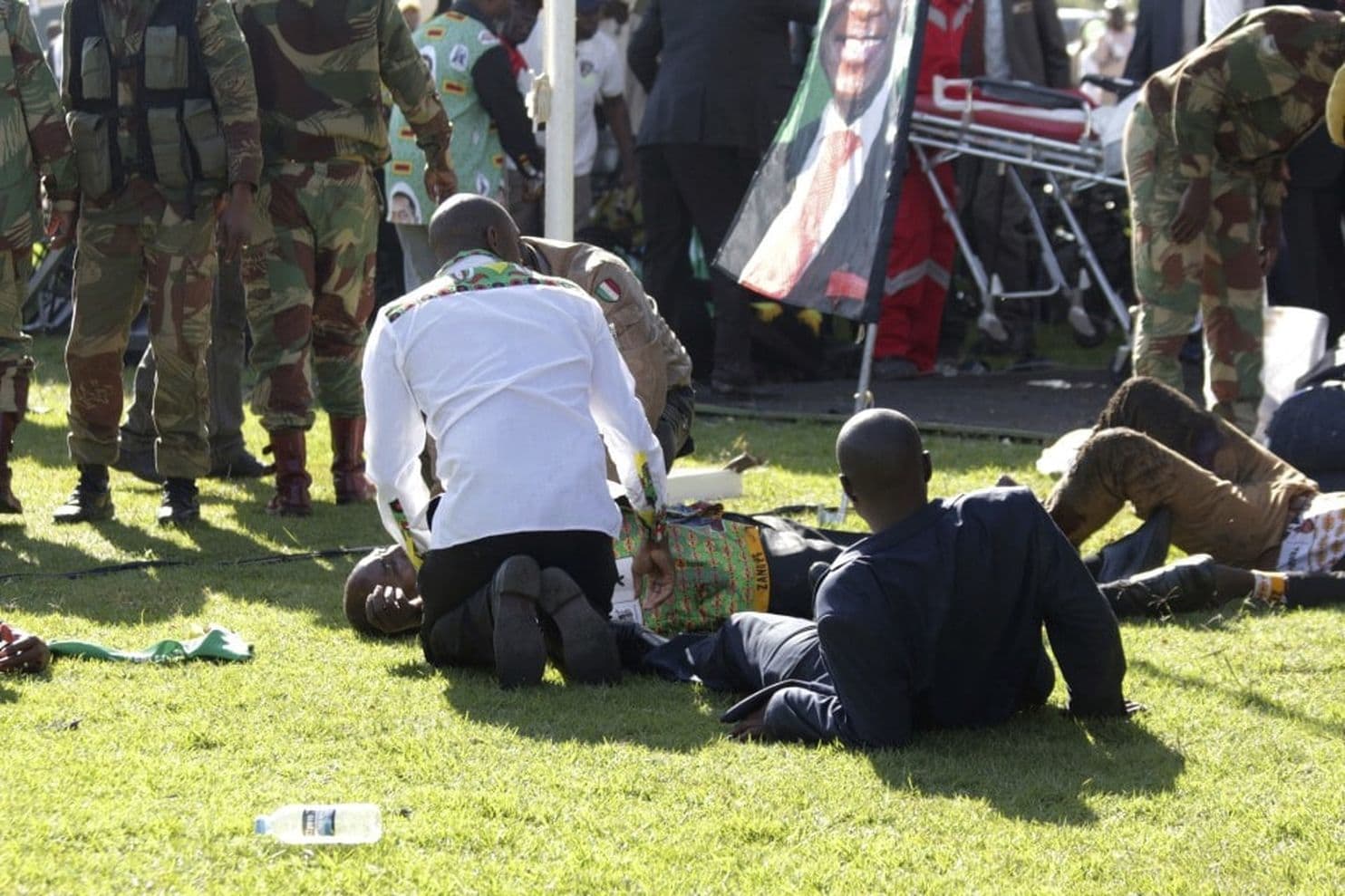 A grenade blast at a political rally in Bulawayo on June 23 left two dead — and a lot of questions.

Source: Zimbabwe has an election coming up. Is political violence brewing? – The Washington Post

Injured people are attended to after an explosion at a Zanu PF rally in Bulawayo, Zimbabwe, on June 23. (AP)

Zimbabweans head to the polls on July 30, in the first presidential election since the ouster of President Robert Mugabe last year. Until a week ago, Zimbabwe’s presidential campaigning had been relatively peaceful, with the exception of some violence reported during the party primary elections.

That changed abruptly on June 23, when Emmerson Mnangagwa, Zimbabwe’s new president, survived a grenade blast at a political rally in Bulawayo, the country’s second-largest city. The president’s office announced on June 26 that two people died from injuries sustained during the attack, while 49 others remained in the hospital.

This was the first time Zimbabwe had seen a direct attack on the life of the sitting president. In the past, the country’s election-related violence has largely been state sponsored. Examples include the 1983 Gukurahundi massacres that left more than 20,000 dead; the 2005 Operation Murambatsvina that displaced over 700,000, and the post-election violence in 2008 that forced opposition leader Morgan Tsvangirai to withdraw from the presidential race.

Who is behind the Bulawayo blast?

Two people have been arrested in connection with the attack. The main opposition, Movement for Democratic Change (MDC) led by Nelson Chamisa, has not been linked to the blast.

In an interview with the national broadcaster, Mnangagwa dismissed the notion that the attack could have been engineered by people from Bulawayo, the epicenter of the 1983 Gukurahundi massacres. Some in Zimbabwe continue to hold Mnangagwa, who was state minister at the time, personally responsible for the atrocities.

Mnangagwa blamed Saturday’s attack on what he called his “usual enemies” — referring to unknown assailants who have made at least six attempts on his life before becoming president. After a cyanide attacklast October at a ZANU PF rally, Mnangagwa had to be airlifted to South Africa for treatment.

Statements by the ZANU PF youth league, war veterans and Vice President Constantino Chiwenga all point toward internal party strife in the ZANU PF as cause for the blast. Mnangagwa told the BBC that he suspected the ZANU PF’s G-40 faction, made up of supporters of Grace Mugabe, Robert Mugabe’s wife.

[To understand the coup in Zimbabwe, you need to know more about Grace Mugabe]

Mnangagwa’s G-40 comments follow a recent pattern in which ZANU PF elites have accused fellow party members of disloyalty and sabotage. For instance, in 2014, Mugabe fired Vice President Joice Mujuru and eight Cabinet ministers on allegations of factionalism and a plot to kill him.  Mnangagwa  later replaced Mujuru as vice president.

In the past two years, tensions have intensified between the two major factions within the ZANU-PF: the pro-Grace Mugabe G-40 faction and the pro-Mnangagwa Lacoste group. In October 2017, Grace Mugabe publicly pushed for Mnangagwa’s dismissal.

When Mnangagwa was dismissed, nine out of 10 ZANU PF provinces supported Mugabe and his wife. But Mnangagwa’s dismissal alienated war veterans and military elites. In response, the military placed Robert Mugabe and his family under house arrest, neutralized the pro-Mugabe security sector and pushed for civilian arrests of G-40 members, many of whom remain in exile.

After the November transition, when Mnangagwa became president, pro-Mugabe security sector officials Zimbabwe Republic Police Commissioner Augustine Chihuri and Happyton Bonyongwe, chief of the Central Intelligence Organization (CIO), were forced out and have not been seen in public since.

What do citizens think?

A popular theory on social media, peddled by media mogul Trevor Ncube and self-exiled former minister of information Jonathan Moyo, points to friction between Mnangagwa and his vice president. The vice president facilitated the military intervention that led to Robert Mugabe’s forced resignation in November.

Chiwenga supporters have dismissed this argument, citing the decades-long friendship between Chiwenga and Mnangagwa. Chiwenga’s wife, moreover, was one of those injured during the attack.

New tensions in the lead-up to July’s elections

What happened last Saturday brought new tensions into what had been a relatively peaceful campaign. Chamisa, opposition leader and successor to the late Morgan Tsvangirai, has been able to campaign freely across the country, including in rural areas that were previously a no-go area for the opposition. The Zimbabwe Electoral Commission has yielded to some opposition demands for reforms, including the release of an electronic copy of the voters’ roll. Just days after the attack, election stakeholders signed a peace pledge. The president has said elections will go ahead as planned on July 30.

In a recent Afrobarometer survey, (conducted before the Bulawayo blast), 84 percent of Zimbabweans reported being registered to vote and expressed commitment to democratic election of their leaders. Almost all — 97 percent — would like the government to ensure a violence-free election. Analysts expect the election will be closely fought.

Chipo Dendere is a consortium for faculty diversity fellow and visiting assistant professor of political science at Amherst College. Dendere studies the relationship between migration and democratization; social media, factors that influence political transitions; and vote choice, identity, public opinion and political behavior. Follow her on Twitter at @drDendere or at www.drdendere.com