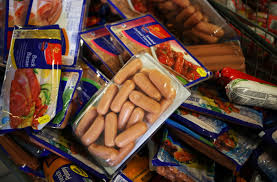 Zimbabwe will join other countries in banning imports of processed meat products from South Africa after a deadly listeria outbreak there, Zimbabwe’s ministry of health said in a statement on Tuesday.

Cold meat products are seen in a trolley after they were removed from the shelves of Pick n Pay.

South Africa on Monday said cold meat products were to blame for delays in tracing the cause of the world’s worst listeria outbreak, which has killed 180 people in the past year.