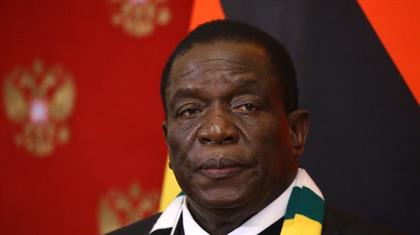 A statement from the presidency did not give reasons for the immediate “termination of employment” of Mutodi.

A prominent opposition Movement for Democratic Change (MDC) lawmaker and two party officials were originally arrested for protesting over food shortages experienced during the coronavirus lockdown.

A Zimbabwean woman leads a team of volunteers to feed her community during the COVID-19 lockdown as the majority of bread winners earn their living in the informal sector.

The all-female trio were then abducted from the police station by unidentified men and taken out of the capital where they said they were beaten up and sexually assaulted.

They were later dumped by a roadside where they were found by party colleagues and taken to hospital.

In his tweet Mutodi claimed the three opposition officials “went out for a romantic night to Bindura (a small town) with their lovers”, a couple of miners.

He said the women were beaten up “when they demanded foreign currency for their services”.

Heads of mission of the European Union countries and the US based in Harare on Wednesday said they “expect from the government of Zimbabwe a swift, thorough and credible investigation into the abduction and torture” of the opposition members and two others assaulted in the second city of Bulawayo.

“The perpetrators of heinous acts of this kind and other human rights violations need to be identified and prosecuted,” they said in a statement.

The axed deputy minister’s latest callous remarks came a week after he was reprimanded for criticising Tanzanian President John Magufuli’s handling of the Covid-19 pandemic.

Mutodi has also been at loggerheads with information minister Monica Mutsvangwa whom he accused of teaming up with her husband to eliminate him.

Last week he tweeted that he was “living in fear” of foreign affairs minister Sibusiso Moyo and the information minister’s husband.