Zimbabwe chose to bat first after captain Chamu Chibhabha won the toss in the second one-day international (ODI) against Pakistan. 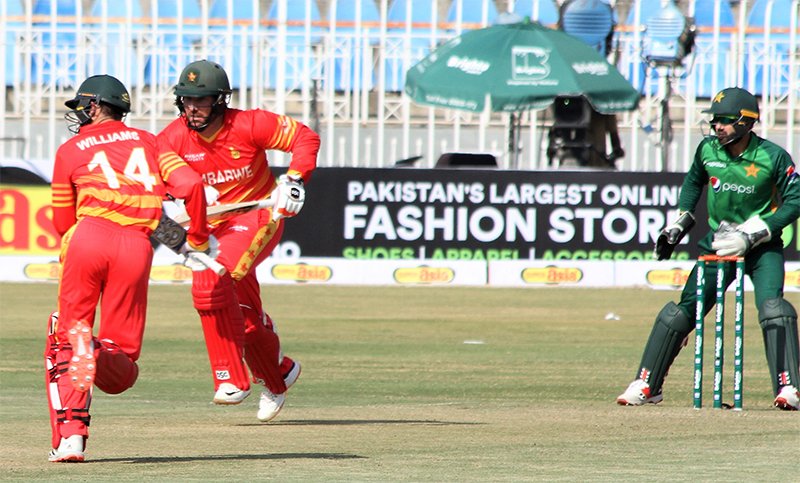 Zimbabwe opening pair continued to present a problem for team , as Brian Chari as Chamu Chibhabha struggled to handle the sort of pace Shaheen Afridi, Haris Rauf and Muhammad Musa generated , and the entire team was bowled out for 206 in 45.01 overs.

Branden Taylor, the centurion of the first ODI, could make 36 and opener Brian Chari made 25 as no other batsman could get any significant runs.

Iftikhar Ahmed took 5 wickets for 40 runs; Iftikhar displayed his career best bowling performance with five for 40 in the 10-over quota in his sixth ODI match.

Zimbabwe were restricted to 206 due to Pakistani allrounder Iftikhar Ahmed’s excellent bowling performance in the second One-day International being played here at the Rawalpindi Cricket Stadium.

A controversial umpiring decision was seen in Pakistan’s second ODI against Zimbabwe in Rawalpindi when debutant Haider Ali was adjudged out lbw despite replay showing that the ball had kissed his glove. The 20-year-old had no choice but to walk back to the pavilion disappointed.

Pakistan’s caption completed his half century against Zimbabwe with 101 strike rate.

Pakistan completed target in 35th over with lose of 4 wickets as Pakistan leads with 2-0 against Zimbabwe.

Before today’s match, Pakistan and Zimbabwe have faced each other 60 times. The green shirts have won 53 and lost four of those encounters with one tie and two no-results.

Both teams are opening their World Cup Super League campaigns after the International Cricket Council introduced the competition to bring context to ODI cricket.

The top seven teams in the league will directly qualify for the 2023 Cricket World Cup in India. The league features 13 countries playing four home and away three-match ODI series.

Team Zimbabwe will also play three Twenty20 Internationals at the same venue during this tour of Pakistan.