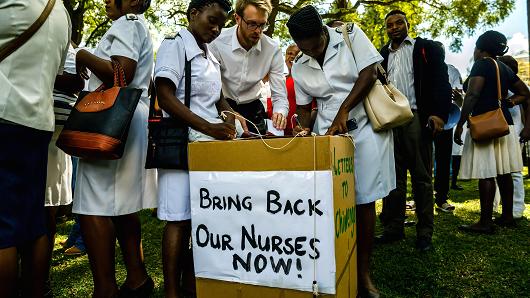 Jekesai Njikizana | AFP | Getty Images
People cast letters of complaint to Zimbabwe’s Vice President Constantino Chiwenga in Harare’s Unity Square on April 20, 2018, after thousands of nurses were dismissed in a dispute over pay.

May 1 might be celebrated as International Workers’ Day across the globe, but in Zimbabwe government employees have rallied together in protest in recent weeks by staging a series of strikes.

On Friday it was announced that members of the Zimbabwe Teachers’ Association would strike on May 8 when schools re-open after the holidays. The 44,000-member group cited stagnant pay and restrictive annual leave as reasons for the action.

“No amount of threats or illegal declarations from individuals in government will stop or intimidate teachers from exercising their constitutional and legal right to participate in industrial job action,” said a statement by the Zimbabwe Teachers Association Monday, addressed to the Education Ministry.

In mid-April, 16,000 nurses were fired by the Zimbabwean government following a multi-day walkout that began on April 16 over unpaid wages. The strike took place just one day after a month-long walkout by junior doctors ended. 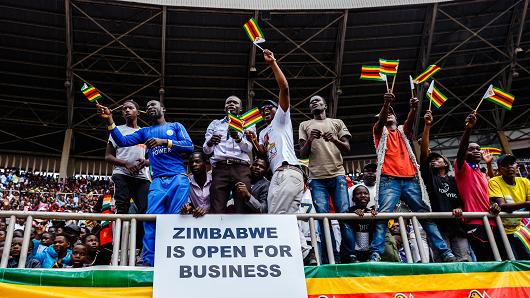 Zimbabwe’s workforce has “seen a rot in their earnings under generally inhospitable investment conditions,” he explained. Government workers were taking advantage of the “less authoritarian leadership under (new President Emmerson) Mnangagwa,” and recognized that civil satisfaction would be under the spotlight as the country gears up for elections promised by the president in July.

Laurie described the “contagious effect” of the succession of strikes as different groups of government staff attempted to improve their working conditions.

Mugabe was ousted in a military coup in November last year after nearly four decades of rule. He was replaced by his deputy Mnangagwa, who has pledged “free and fair” elections this summer and pushed the mantra that “Zimbabwe is open for business” in an attempt to revive the country’s economy.

But, “the man on the street has not benefited from the positive changes that are slowly taking hold in the country,” Samir Shasha, chief executive of Zimbabwe-focused investment firm Cambria Africa, told CNBC Monday. “The promised investments by visiting entrepreneurs will only bring long-term benefits,” he added. 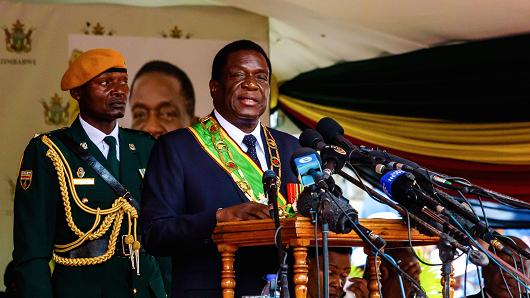 Zimbabwe’s economy infamously suffered from hyperinflation in the 1990s and 2000s under Mugabe. Shasha referenced the decline in the purchasing power of money as a possible reason for the dissatisfaction which caused the strikes.

Zimbabwe’s bloated civil service — an attempt to create jobs in the country — means that the government struggles to meet its wage bill every month, Laurie said.

Unemployment figures for Zimbabwe vary widely. The World Bank has measured the figure at 5.2 percent for 2017, though above 90 percent has been cited by other sources. This is down to the extent of Zimbabwe’s informal economy, and the prevalence of subsistence farmers.

In December 2014, Zimbabwe’s late opposition leader Morgan Tsvangirai accused Mugabe’s government of creating a “poor nation of vendors; a country where everyone is trying to sell something to someone.”

Laurie said that Zimbabwe’s workforce was currently looking ahead to its brightest future in decades given the recent governmental upheaval. “Politicians need to be more receptive to their demands,” he added. But, striking workers “need to be careful of settling for unrealistic promises from politicians that are ultimately unsustainable,” he warned.