But by national consensus 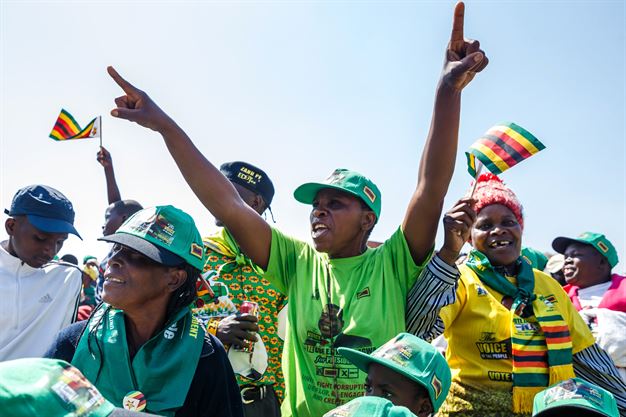 In recent days – especially, after the botched 25 October 2019 anti-sanctions march, in which very few people heeded government’s calls for the nation to come out in full force to demonstrate against restrictive measures imposed by some western countries, especially the European Union (EU) and United States of America (US) on some 142 top Zimbabwe administration officals and entities allegedly involved in committing gross human rights abuses, electoral fraud, corruption, and economic mismanagement – there has been a resurgence of vitriolic accusations against all those not in agreement with the regime’s assertions that these were, in fact, economic sanctions, which, in turn, were responsible for the country’s dismal performance.

Lately, the issue of ‘national interests’ has been raised, as those opposed to government’s views have been openly accused of nothing short of traitors and sellouts – a term notoriously employed during the liberation struggle, mainly by combatants aligned with the current ruling ZANU PF party, in brutally dealing with those suspected of liaising with colonial Rhodesia forces.

However, this notion by the Zimbabwe administration can not go unchallenged, as such a declaration is not only premised on a narrow-minded perspective, but is obviously dangerous – since it borders on dictatorial tendencies, which force the nation’s citizenry to blindly align themselves to an ideology or belief that they were never consulted on, and are not in agreement with.

As much as all nations on the face of this planet have their own ‘national interests’ –  that each and every patriotic citizen is expected to respect and uphold – these should always be premised on the basis of democracy, national consensus and basic freedoms – all of which are an integral part of Zimbabwe’s constitution.

Indeed, “the promotion and protection of the national interests of Zimbabwe”, is enshrined in Section 12 (1)(a) of the country’s supreme law, as one of the principles of the country’s foreign policy.

However, the same sacred law of the land also holds sacrosanct the tenets of democracy, fundamental human rights and freedoms – mentioned numerous times, for instance, in the Preamble, Founding Provisions (Chapter 1), and Declaration of Rights (Chapter 4).

Most notable amongst these is Section 60 (1)(a) and (b), which makes it unequivocally clear that “Every person has the right to freedom to conscience, which includes freedom of thought, opinion, religion or belief; and freedom to practise and propagate and give expression to their thought, opinion, religion or belief, whether in public or in private and whether alone or together with others”.

Furthermore,  Section 61 (1)(a) guarantees that, “Every person has the right to freedom of expression, which includes freedom to seek, receive and communicate ideas and other information”.

We could go on and on, but what is abundantly clear is that, as much as ‘national interests’ should and must be promoted and protected, these should never be divorced from all the other rights and freedoms.

Which then takes us to the contentious issue of sanctions.

Just as with any other ‘national interests’, who makes the determination that, we as a nation, have agreed that what the EU and US imposed in 2002 and 2001 were not merely targeted restrictive measures (travel bans, asset and financial freezes, and other cooperation restrictions limited only on certain named individuals and entities) that have no impact whatsoever on the economy of the country, but were actually economic sanctions that have adversely crippled every citizen’s day to day life?

Has there ever been a meeting of all major stakeholders to reach a consensus on what Zimbabwe’s ‘national interests’ in respect of this issue are, or, better still, conduct a referendum to ascertain what the overwhelming view of the nation is?

Before, we as citizens, can be expected to promote and protect any ‘national interests’, basic constitutional tenets of democracy should be adhered to first.

Furthermore, no one who wants to be honest with themselves can deny the fact that this emotive national issue has been debated for the past two decades without the citizenry reaching any conclusive consensus, such that whatever view is propagated by any individual or grouping is purely based on opinion – and therefore, the inalienable right of every citizen to freely express their thought, opinion and belief has already been established as being enshrined in the constitution.

No section of Zimbabwean society can ever truthfully declare that they have the unquestionable and infallible facts surrounding the effects of these sanctions – targeted or not – on the economy and livelihoods of ordinary people. Academics may produce their own findings, but these can never be received as divine facts.

Even ‘evidence’ proffered by world-renowned scientists on the real causes of global warming and climatic change – which attribute this phenomenon to human activities associated with carbon emissions – are still very much open to debate. Similarly, it would be severely disingenuous to cast in stone that sanctions in Zimbabwe have been proven, beyond any reasonable doubt, to be responsible for the economic meltdown being experienced.

This sanctions issue is, therefore, a matter of continued academic and political debate, which can not be wiped under the carpet of ‘national interests’.

Thus, no one, including the state, can ever revoke that freedom from anyone who may have a contrary view – as even the right to challenge the policies of the Government is also an integral and sacred part of the constitution.

Actually, state media, that has been at the forefront of propagandizing only one side of this debate – with scant regard of a vast section of the citizenry holding a contrary viewpoint – is the one in gross violation of the country’s supreme law – as Section 61(4)(b) and (c) unequivocally states that, “All State-owned media of communication must be impartial; and afford fair opportunity for the presentation of divergent views and dissenting opinions”.

However,  what the nation has witnessed, especially over the past two decades – when democratic space in the country has been severely constrained – is that only ruling party and government sentiments have been afforded expression, and anointed as scared fact – whilst, opposing assertions have been largely categorised as treacherous and unacceptable.

All that this has managed to accomplish is contributing to the distorted notion of ‘national interests’ as being solely the determination and preserve of the governing party – a trait that is not in line with acceptable democratic values and principles.

To make matters worse, those with differing views have been labelled members or supporters of the main opposition – Movement for Democratic Change (MDC) and, by extention, puppets of western countries.

These very dangerous statements by the Zimbabwe government are not only in violation of Section 67(2)(a), which stipulates that, “Every Zimbabwean citizen has the right to form, to join, and to participate in the activities of a political party or organisation of their choice” – as they seek to vilify and condemn those aligned to the opposition – but also seek to stifle independent thought, opinion and belief by dishonestly aligning dissenting voices with perceived ‘enemies of the state’.

Just to make it clear to those in authority, as much as it is every citizen’s right to join a political party of their choice – most of us are actually independent thinkers and academics, whose opinions, beliefs, and views are not guided by any political party ideology, or western donor influences.

We are educated Zimbabweans who can think on their own, and capable of formulating their own conclusions on any matters affecting our lives, or country, or world, without being unduly controlled by any ‘third force’. Actually, the fact that the government would even contemplate such a notion, is shooting down their own education efforts and system, as they are effectively saying that “our education system is so poor and ineffective, such that our graduates can not think for themselves, but need some super power to do that for them”.

The Zimbabwean administration should desist from hiding their own opinions behind the veil of ‘national interests’, but learn to respect the country’s own enviable constitution, which safeguards pertinent rights of all its citizens – such that, as much as we might disagree on the true effects of sanctions (or any other matters of national importance ), this is purely an academic and political issue, whose debate and discource should be encouraged, rather than stifled under threats of treason and selling out.