‘Zimbabwe on verge of special time’ . . . Victory is ours: ED Source: ‘Zimbabwe on verge of special time’ . . . Victory is ours: ED – Sunday News

President Mnangagwa arriving at the giant National Sports Stadium for the Victory Rally yesterday. Other pictures show tens of thousands of Zanu-PF supporters who thronged the venue

President Mnangagwa encouraged Zimbabweans to give utmost hospitality to international visitors and observers who are in the country for the elections, but encouraged the latter to stick to their business of observing the polls and not dabble in the country’s political affairs. 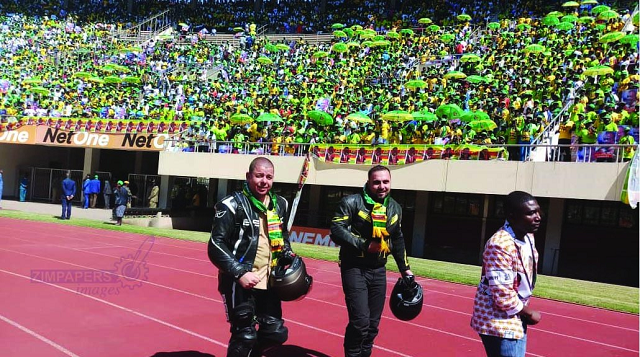 He also commended the democratic space and the “winds of freedom which have blown across Zimbabwe” to open the space for multiple political parties to campaign. 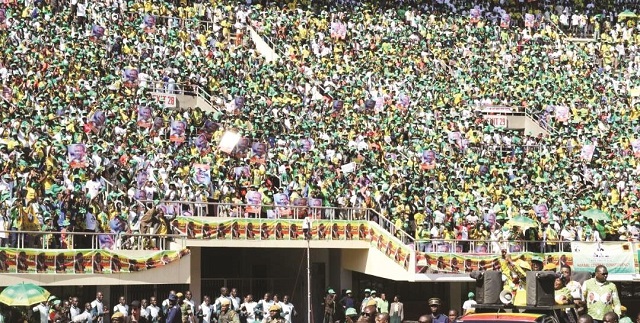 The Zimbabwe Electoral Commission (Zec), President Mnangagwa said, is an independent Commission and neither Government nor political parties can influence the electoral body, which is guided by the Electoral Act and the Constitution. Addressing the 40 000-strong crowd at a rally dubbed the “Victory Rally”, the Zanu-PF Presidential candidate said tomorrow’s plebiscite is a vote for the future.

They are saying — and I share their views — that something special is coming to Zimbabwe. Something special has renewed our hope as people of Zimbabwe. A nation invigorated by this huge democratic process, a nation that is determined to keep going with changes we have seen in the past eight months.

We were finishing off someone’s term in office and our room for manoeuvre has been limited. But once re-elected on Monday with a real mandate for change and a full five-year term, I guarantee you it’s go and go in our country. My commitment change is to bring concrete change that will give comfort to all Zimbabweans,” he said.

Zanu-PF does not take voters for granted as it has worked hard to garner popular support, he said.

“I will never be complacent, I will never take the support of Zimbabweans for granted. We are working for every vote and you should work for every single vote. Over the past eight months, I have set about achieving the vision you sowed, the hope which you sowed eight months ago. There is of course a big difference between a vision and a reality to get from where we are to where we want to be, we cannot do that overnight.”

President Mnangagwa said it would be disingenuous for anyone to ignore the current transformation taking place in Zimbabwe.

“No one, no one who is honest will say things are not changing, we all know that after opening the democratic space, after opening Zimbabwe with the mantra ‘Zimbabwe is open for business’, we have received hundreds and hundreds of investors coming to Zimbabwe looking for opportunities to invest in our country. We have opened the country to the world and within the last seven months.”

He said the campaign trail has been gruelling, the hope in most Zimbabweans is inspiring. President Mnangagwa said: “I have met all Zimbabweans, old and young, men and people, supporters and enemies, enjoying every minute. We as Zanu-PF have held rallies across the country, speaking to many hundreds of thousands of people sharing our vision for the new Zimbabwe and at every rally we feel the same sense of energy, of excitement, we can see it through the number of people coming to our rallies, we can see it through the eyes of our people, we can see hope.”

On international visitors President Mnangagwa said: “We have visitors that have come to our country and my appeal to you is to be hospitable to them, speak to them properly. We also call on the observers who have come to stick to their work and not to meddle in the affairs of the country.”

“We also have our friends from Sadc, revolutionary parties who have come to be with us. Frelimo of Mozambique, ANC of South Africa and SWAPO of Namibia, MPLA of Angola and our friends from Zambia and Malawi are all here,” he said.

President Mnangagwa said Zimbabweans had shown their maturity through observing peace through the campaign. He, however, warned merchants of chaos and violence that the rule of law will prevail.

“We want to have our elections in peace, we know that there are those who want to provoke members of our party, but we will not retaliate. We have our security forces who are there to maintain peace. We are confident that the police will be on top of the situation to quell any disturbances that may arise. Those that may have the spirit of Legion will be dealt with in terms of the law.”

The President said voters in Harare have an opportunity to vote for Zanu-PF councillors who will provide better service delivery than those from opposition political parties.

Newer Post
WATCH: MDC’s Chamisa confident he will be Zimbabwe’s next President
Older Post
Zimbos in SA flock to vote