MDC supporters had gathered at party headquarters in Harare to listen to a speech by party leader Nelson Chamisa.

Riot police in Zimbabwe’s capital have forcefully dispersed supporters of the main opposition party who had gathered to listen to a speech by their leader.

Hundreds of police officers on Wednesday blocked roads leading to the headquarters of the Movement for Democratic Change (MDC) in Harare but supporters continued to gather, singing and chanting before the arrival of party leader Nelson Chamisa, who was set to address them.

MDC officials – who accuse President Emmerson Mnangagwa of adopting the heavy-handed tactics of his late predecessor, Robert Mugabe – said the skirmishes once again showed that the opposition party was a victim of government brutality.

“The MDC strongly condemns that violent attack by the police on the citizens who had peacefully gathered outside our (headquarters). This kind of barbaric brutality is totally unacceptable in Zimbabwe,” MDC national spokesman Daniel Molokele said in a statement.

On Sunday, Mnangagwa defended his record in an opinion piece carried by CNBC Africa, saying his administration was opening up political and media space.

But police have this year banned several MDC gatherings, saying they feared the events would turn violent. 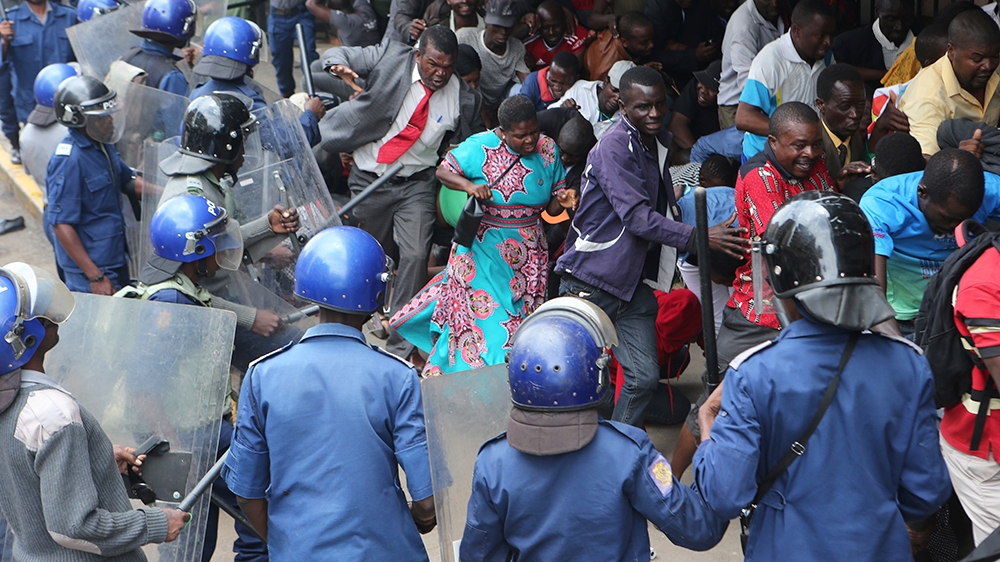 Political tension is rising in Zimbabwe, where the population is grappling with a severe economic crisis that has seen rolling power cuts lasting up to 18 hours a day and shortages of foreign currency, fuel and medicines.

Most public sector doctors have been on a strike over pay since September, which has paralysed government hospitals where the poor seek treatment. Other public sector workers are demanding US dollar-indexed salaries to protect them from soaring inflation.

Critics say Mnangagwa has failed to keep promises he made during last year’s election campaign to revive the economy by pushing through economic reforms, attracting foreign investment to create jobs and rebuilding collapsing infrastructure.