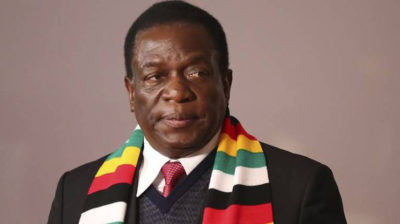 (Bloomberg) — Zimbabwe’s finance minister responded to the country’s worsening economic crisis last week by blacking out inflation statistics for the next six months, boosting the price of the little power that’s available five-fold and admitting what the International Monetary Fund told him in April: the economy will contract for the first time since 2008.

At the same time he spoke of fiscal surpluses and a relaxation in local ownership requirements for the key platinum industry. This all happened in a country with daily power cuts of up to 18 hours and shortages of everything from bread to motor fuel. People are receiving food aid in cities for the first time and a drought has necessitated the import of hundreds of thousands of tons of corn.

When Robert Mugabe was ousted after four decades in power in late 2017 his replacement, Emmerson Mnangagwa, promised economic regeneration and declared that Zimbabwe is “open for business.” Instead things have gone from bad to worse with the effects of rapidly expanding money supply through the sale of Treasury bills under Mugabe’s rule coming home to roost and this year’s outlawing of the U.S. dollar in favor of a local quasi currency that can’t be traded outside the country causing panic.

“Zimbabwe is at a tipping point and if it falls over the edge it’s going to be quite a long way in coming back,” said Derek Matyszak, a Zimbabwe-based research consultant for South Africa’s Institute for Security Studies. “The wheels are falling off. There is no way out of a Ponzi scheme other than a massive infusion of cash to pay off your creditors.”

The country with the world’s highest inflation rate after Venezuela also suspended annual consumer-price data for the next six months. The authorities need to collect comparable data since the introduction of the new currency in February. That marked a return to 2009, when the country abandoned the Zimbabwe dollar in favor of the U.S. dollar and other currencies after inflation surged to an estimated 500 billion percent.

If the more commonly used black-market exchange rate is used, Zimbabwe’s annual inflation is currently 558%, about three times the official rate, while Venezuela’s is 35,004%, according to Steve H. Hanke, a professor of applied economics at the Johns Hopkins University in Baltimore.

Scrapping the official annual rate is “no real loss from an analytical perspective,” said Jee-A van der Linde, an economist at NKC African Economics in Paarl, South Africa. “These elevated inflation readings did little more than create panic and damage what little confidence was left.”

Still, the decision evokes other countries in crisis. Venezuela halted publication of inflation data and while it periodically releases figures, it isn’t operating on a regular schedule. In 2013, Argentina was censured by the IMF for tampering with its data.

A de-linking of the country’s quasi-currencies from parity with the U.S. dollar in February and the re-imposition of the Zimbabwe dollar overnight in June has fueled depreciation with the currency officially trading at 9.28 to the dollar on Aug. 2. The black-market rate was 10.8, according to Marketwatch.co.zw, a website run by analysts. While the government has argued that in the face of foreign-currency shortages it has no choice but to reintroduce its own currency, Hanke disagrees.

“The Achilles heel is the introduction of the new currency to the exclusion of the dollar,” he said. “They have decided to go in the completely opposite direction and claimed it’s the best thing since sliced bread and it’s going to be an absolute disaster.”

While the cost of basic services has climbed 400% this year, pay rises have been around 10%, said Japhet Moyo, secretary-general of the Zimbabwe Congress of Trade Unions, which has 130,000 members.

Finance Minister Mthuli Ncube tried to highlight the country’s first positive current-account balance in a decade as a sign of progress. Since his appointment last year, the government has sold only marginal amounts of Treasury bills. And earlier this year, the Cambridge University-trained economics professor forecast that month-on-month inflation, which surged to 39.3% in June, would be close to zero by year-end.

The fundamental problem is that the government has failed to attract significant investment and hasn’t substantially changed the policies of the Mugabe era, said John Robertson, an independent economist in Harare, the capital.